Today’s text it about the David Bowie exhibition that started in London and was shown in Berlin this year, an interview with Bowie from 2000 and a photo story of my visit of the exhibition. Since Bowie is British we start with English today, the German version will follow after that.

The international exhibition David Bowie was shown in Berlin’s Martin Gropius Bau from May 20 to August 24, 2014. It “retraced the carriere of this exceptional artist, investigated his creative process as a music performer and cultural icon and demonstrated his multifaceted stylistic changes and reinventions. The progressive spirit of Bowie is reflected by the comprehensive audio-visual orchestration of the exhibition, that merges sound and vision to a very special experience“. (a quote from the website of the David Bowie exhibition).

Among other things David Bowie is a collector and diligent chronicler, therefore 60 of his original stage costumes were shown as well as pages from his diaries, exchanges of letters (e.g. with Marlene Dietrich), posters, stage and costume scetches, paintings and and and more more more.

The exhibition was first curated and shown at the Victoria and Albert Museum, London, („The world’s greatest museum of art and design“), from March 23 until August 11, 2013.
„The V&A was given unprecedented access to the David Bowie Archive to curate the first international retrospective of the extraordinary career of David Bowie. David Bowie is featured more than 300 objects that include handwritten lyrics, original costumes, fashion, photography, film, music videos, set designs and Bowie’s own instruments.“ (a quote from the website of the David Bowie is-exhibition)

The Berlin version, second station of this “touring exhibition“, is even bigger (and greater!) than the premiere in London, because addition space had been added for exhibits of Bowie’s time in Berlin 1976 until 1978. There he produced his three albums LOW, HEROES and LODGER, he played Paul, the lead in David Hemming’s debut as a director: JUST A GIGOLO, a film that was to be the last of Marlene Dietrich’s films. Incidentally, I met Ingrid Zoré, the costume designer of that film last year, but unfortunately she did not give me Bowie’s phone number.
In this room they played the German version of HEROES, always a treat to hear.

Why the London exhibition did not include the Berlin exhibits is something of a mystery. Last year on January 8, Bowie’s 66th birthday, the song WHERE ARE WE NOW was published on the official website, Bowie’s first new song in 10 years, and what is this song and the video by Tony Oursler about? Well, among other things it is about Berlin.

But of course I don’t want to praise the Berlin exhibition onesidedly, so let’s criticize one thing: No, you cannot talk of barrier-free access, when there is a lift for people in wheelchairs but at the same time the labels for the exhibits are printed in light grey on a darker grey background, in at most half-lit rooms.

David Bowie is a very versatile artist, as musician, composer, writer, actor, mime, painter, stage and costume designer, as well as being a humorous, creative, philosophical, political anti-genderstereotypical person. I can highly recommend to everyone that has not been able to see the exhibition visiting the website of the exhibition, buying the detailed catalogue as well as of course all records and videos by and with David Bowie.

Before sharing my photographic account of my visit to the exhibition I would like to refer to two older interviews with David Bowie. One was performed by Bowie’s second wife Iman for the magazine Bust in the autumn of 2000 (here is a transcript). Among other things it deals with Bowie’s attitude towards feminism, gender stereotype, the song BOYS KEEP SWINGING which includes the ironic line „Nothing stands in your way When you’re a boy„, machismo and relationships.

Bowie’s answer to the question “What does the word ‚feminism‘ mean to you?“ was: „In general, I suppose, I find it intensely offensive to see women treated as chattel or appendages. I cannot think of a situation where a woman could not do an equal if not better job than a man. Possibly, a situation requiring only brute strength may be the exception, but here again, a woman would be smart enough to organize the right person for the job. In that singular case, probably a man.“
The second interview was done backstage in 2006, when David Bowie was guest on Ricky Gervais’ sitcom EXTRAS: here is the video (1:45 min).

I have been a Bowie fan for decades (and own a number of his records still in the original vinyl versions), also some years ago I moved to Berlin and now live in the vicinity of the Martin Gropius Bau, so there was never any doubt that I would visit the exhibition right away. After an extended phase of excited anticipation I finally went to see it last Thursday, 4 days before the end of ist 3 months run: 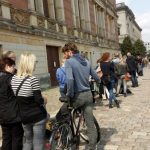 a) August 21, 12:53 pm. I am joining the queue. This is not Japan but the Germans (and the Berlin tourists) are getting better at it. They say it will be 1 ½ hours until we get in. 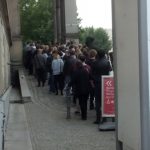 b) After 1 h 12 min we have passed the first corner of the building. In the distance we can see the entrance to the Martin Gropius building. I spent the time roughly learning my lines for my next TV movie, now I start on a newspaper. The weather is fine and so is everybody’s mood. 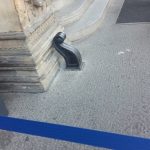 c) Yeah! I’ve reached the top of the steps. What happens now is that they let in the same number of people that have just left the exhibition. Now the people ahead of me up to the lady in the striped tshirt are allowed to enter, I have to wait some more at the blue tape. All that enter get a little voucher to show at the box-office. 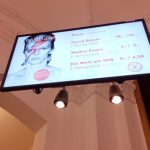 d) Yes, I have reached the box-office! Well actually, the queue at the counter, but it is only a very short queue, less than 10 people. I can manage that standing on one leg. 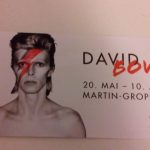 e) This is my ticket! I am now going to see the David Bowie exhibition! 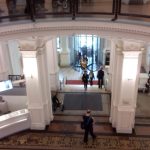 f) Actually the exhibition is on the first floor. They will probably also have a cloakroom there (and a toilet). Downstairs I did not see any guid signs at least. When I get upstairs there is … another queue! I can see the door to the exhibition, right above the front door of the building. I’ve come a long way! 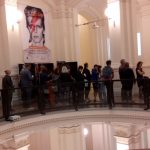 g) No two queues are alike. This one is a semi circle. 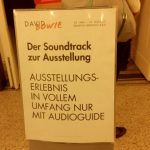 h) Next we are handed the audio guides! „You can adjust the sound with the + and – buttons, the rest happens automatically as the respective audioclips are triggered in the rooms“. Great! Now let the show begin! 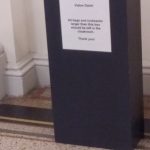 i) Oh, the bag sizer. My bag is too large. The cloak room apparently is in the cellar (is that the word? I mean the floor below the basement). Running down the stairs I notice them, find the cloakroom, leave the bag, race up again in no time. Yes, I am in good shape! 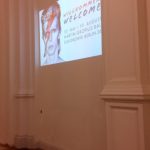 j) Fortunately the queue has only been moving slowly, and the nice people in front of my old place saved it for me. How nice. Now only one final wall is between me and the exhibition. 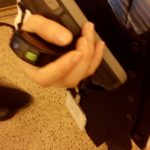 k) Here my ticket is being checked… 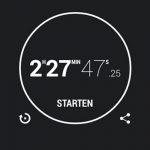 l) … and after 2 hours 27 minutes I am entering the David Bowie exhibition! And YES, it was well worth waiting for, such a great show! 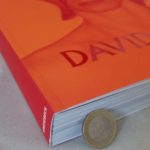 m) This is the catalogue, it is really very thick! They had it in German or English, for roughly 30 €. Soon everybody who unfortunately missed the exhibition will be able to buy a hardback edition for about 45 €. 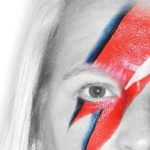 n) In the evening and half the night I put on Bowie records.