Did you know that in German some people, when they talk of a baby or toddler, and when it is binary, they call it little man or little mouse. “Oh, the little man is so cute / shy!” and “Oh, the little mouse is so tired / awake!” Now I don’t want to talk about the possible attributed characteristics, but only about the terms. Little man respectively little mouse. Some mothers or fathers even talk about their little son and their male partner as “my two men“. However, I have never heard of “my two mice” for female partner and little daughter. (Neither “my two women“, although once someone said “my two girls“).

So, the male infant, the male toddler or child is a man, but only a small or little one. When the boy gets older, he is sometimes called a big boy or a junior. And later he becomes a real man. Basically, a penis seems to be enough to turn a child into a (little) man, like his father, but smaller.

The female baby, toddler or child is a small mouse, a little mouse or a just a mouse. What if she gets bigger? Will she be a big mouse, perhaps a jumping mouse or even a rat? When does she become a woman, like her mother? And is there also the intermediate stage “little woman”? I’ve never heard that said of girls. For a girl (in German „das Mädchen“ which is the grammatical neutrum!) the vagina is not enough to make her a (little) woman. Why? Does that sound weird, does it feel strange to speak of a newborn female human being as a (little) woman? Does that sound too sexual, like developed breasts, like sexual maturity? Or is “little woman” simply an outdated paraphrase for good, hard-working housewife? 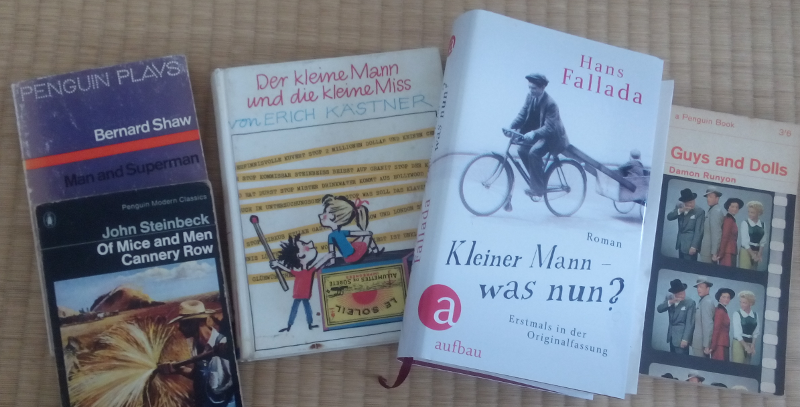 In the twitter sphere I read about a guy who called his teenage children Junior and Princess. He did lots of great fun things with Junior, took him to rock concerts, gave him an electric guitar, and was very proud that his son shared his taste in music. A chip off the old block, as they like to say in the UK. And the daughter? Well. Nothing. If he also did something with her then at least he didn’t write about it on twitter. Once he tweeted that he would lie in wait with a shotgun if his princess ever ‘brought one home’. Good, or rather not good. Junior and Princess.
By the way, I also find it strange that doll or little doll is only used for girls and young women in German (Puppe and Püppchen). There are lots of dolls for boys, too, and by that I mean not only male hand puppets like magicians, robbers, Seppels and Kasperles.

I sometimes also experience this little man-little mouse-number with parents who basically think about gender roles, who don’t automatically dress little girls pink and purple-pink and reserve all other colours for boys, who don’t buy a princess school bag for their daughter and one for their son with an astronaut, superheroe, construction worker and footballer on them. They, too, say little man and little mouse. Not always naturally. But surprisingly often.
Why not let a child be a child and not turn them into a small adult or a furry rodent? Of course I have nothing against pet names, and nothing against animal pet names. Only if there is such a clear boy-girl separation, it does have a strange aftertaste.

I recently told an English friend, mother of a son and a daughter, about the Little Man-Little Mouse phenomenon, she was very surprised, because there is no such thing in the English everyday language. Unfortunately, there are other ways to separate boys and girls unnecessarily through language. Watch English comedian and TV presenter Russell Howard with his comment (5:39 min) Why are girls’ toys patronizing and shit? from The Russell Howard Hour, 2017. But this is actually a topic for another day.

So what to do?

Be inventive and think of something good for your children! Or for other people‘s children, because “oh look, the little man can already walk” is something outsiders also might say. How about Little Hamster and Little Mouse? (Hamster goes well babies anyway, just think of their chubby cheeks). Or (little) boy and (little) girl? Even better, completely gender neutral for all sexes: child or kid? Let children be children! Or – if they must be small adults – Little Man and Little Miss?