Years ago I had worked on a documentary film, an exciting project that led to a special film, an (almost) very good one. Only almost, because of the sound! Unfortunately they did not record the sound separately in many scenes but used the camera sound. So the sound quality was quite bad, which was a strong reason why the film was rejected by several regional TV programmes. That, and the length of the film. 52 minutes, that didn’t fit on any airtime, but that’s a topic for another day.

The sound of a film production is made by a lot of people, not only the actresses and actors with their voices, words, sighs, laughter and their footsteps, and the musicians, but also the sounds, the atmosphere and more, and that brings us to the filmmakers in the sound department. There are various sound jobs in a sound department, and they are usually taken up by men.

Sound Mixers in Film and TV

The first diagram shows she share of women for the sound mixing position in German TV‘s top cop drama TATORT (crime scene), and for the Top 10 to Top 100 German films of the last eight years. The share of men amongst graduates from film school for this qualification is 89 %. 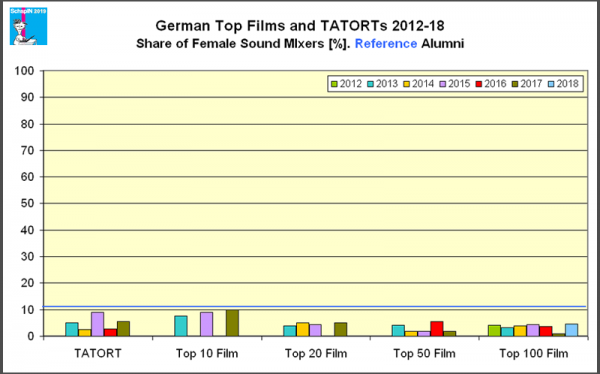 We see sound mixing women in every investigated film group. However, all values – for the TATORT, Top 10, 20, 50 and Top 100 German feature films – are below the 11% female graduates share. In some years there were no female sound mixers at all, for example in the TATORTs 2012 and 2018 and the Top 10 films 2012, 2014, 2016 and 2018. Is sound for women what costume design is for men? Are female sound mixers not trusted with the work, so that only their male colleagues are regularly engaged for productions?

Sources for these figures are the databases of Filmportal, Crew United, IMDB and production websites. Researching sound engineers is often the most time-consuming part of my 6-job checks.
Side note: the short infos at the beginning of the Filmportal entries contains five team positions: director, screenplay, DoP, Editing and Music, in the Crew United database it is director, screenplay, production (and for cinema films distribution). Additional team positions (including sound mixers) are also listed. At IMDB, the short version only includes the director, writer and stars, while the other team positions, mostly very incomplete, follow as additional information.  On the ARD TATORT website we find music, camera, script and direction. And on Wikipedia there is usually direction, script, production, music, camera and editing. I think that the sound department a vital part of a film prodcution, which is why I included the department in my proposal #2v6pN.

The sound department consists of a number of work areas. For six of them, sound mixer, sound assistant, foley artist, recording mixer, sound editor, sound designer, Vincent Lutz provided me with the corresponding statistics from the Crew United database, which tends to give a very good cross-section of the professional activity. The job profiles of these and other film sound professions can be found on the website of the bvft Berufsvereinigung Filmton / Professional Association for Film Sound. 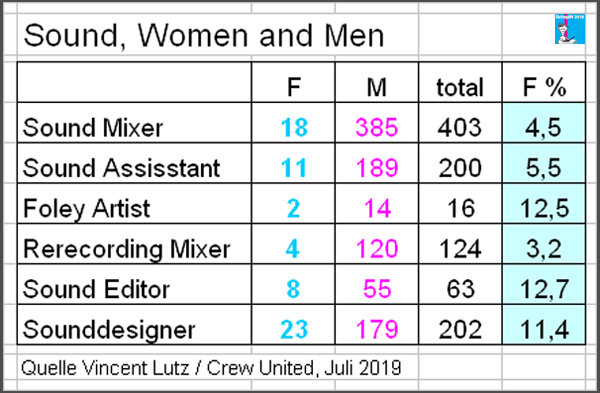 The share of women doesn‘t reach 13% in any of the six sound positions. This gender imbalance is much higher than for example in the camera department (2017: DoP 9.9 % women, first camera assistant 15.9 %, second camera assistant 31.4 %. Source: Crew United).

The low percentage of women isn‘t that understandable. In radio play productions and also in dubbing, I encountered women frequently at the recording desks. In the current digital age, there are a lot of female youtubers and podcasters who are familiar with the admittedly less demanding sound technology. Nevertheless, I don’t understand the fear of or the lack of interest in sound technology. When we were children we produced our own radio plays with two cassette recorders, one for the voices, one for the atmosphere, e.g. a forest or street noise. But that’s a story for another day.

And before I ponder about women with no affinity for sound technology for much longer, I‘ll put these questions to the film sound women.

This February a small group of film sound women got together to form a network and set up a professional association. Why? This is what they write on their website Filmtonfrauen.de:

Filmtonfrauen e.V. aims to collectively promote the presence and achievements of women in the film industry. Currently, only 4% of film sound professionals are women  – we want that to change! Our website pushes to highlight and challenge industry acceptance of stereotyped gender roles in film sound, and promotes role models for women seeking a career in film sound. We want to encourage young women to pursue careers in sound, and we campaign through positive dialogue and networking, to improving the career opportunities of women in film.

Our website profiles the diversity of Filmtonfrauen e.V. members and their work, and simplifies the process of finding the right sound woman for any given film project. We’re actively seeking to expand our network and invite all women and non-binary gender-identified working in the film industry to join us.

The Sound of Sound

At the moment there are about 20 sound women presented on the website, hopefully there will be more. I spoke briefly with two of them, film sound mixer Claudia Mattai del Moro (klangfarberei.com) and sound editor / sound designer Felicitas Heck (twoleftears.de): 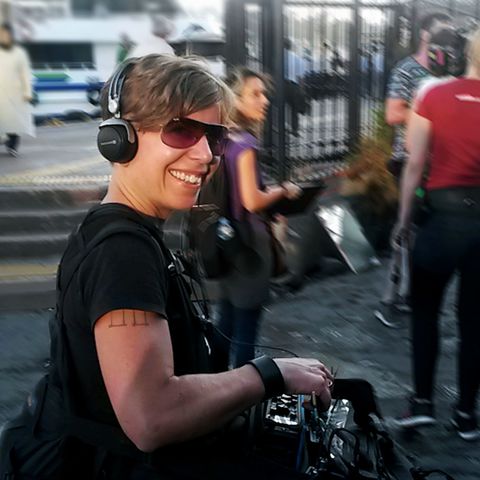 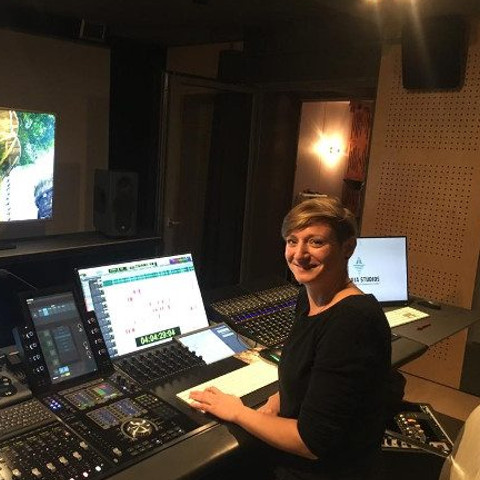 SchspIN: How do people end up professionally in sound?

CLAUDIA: There are different ways of training. Either by studying at a film university that also offers film sound, by dual training as a media designer picture and sound or by taking the “old” path of an internship, sound assistant / boom operator. The studies and training offer a good foundation and theoretical training with practical elements and initial short film experience. The entire sound processing is taught and learnt. Depending on the training company or interest, you decide in which direction you want to go. Postproduction or original sound (set).

FELICITAS: there is no regular way to do it. Many come via the HFF Potsdam (film university), or have studied sound engineering at the UDK (University of Arts Berlin). But there are also people who specialize in the field of film sound after a sound engineering education. And many also have a musical career and somehow end up in film. My CV is stringent, but not necessarily representative.

SchspIN: Why are there so few women in film sound professions? Camerawomen are often mistakenly denied “the ability to carry the heavy equipment”, this would be even less the case with you.

FELICITAS: There are so few women, because sound engineering is one of the STEM disciplines and many are afraid of technology, mathematics, physics. Or it‘s bcause there is simply less confidence in women, it starts with them getting lower marks in school than boys for the same performance, etcetera. And of course there are no female role models.

SchspIN: In analogue times, women always sat on the tape in the recording studios of broadcasters. Was sound on film sets always a male domain or has it changed due to digitalisation, for example like with film editors?

FELICITAS: Yes, there used to be a lot more women in the field of sound technology as well, especially in post-production. And here, too, the socialisation and schooling of women* and girls* plays a major role.

SchspIN: Does it make a difference whether a sound team on the set consists only of men or whether there are also women?

CLAUDIA: I’m told that as an actor or actress it makes a difference whether a woman or a man puts on the lapel microphone. We want to attach the clip-on microphones “invisibly” and therefore have to get very close to the performers. That calls for respect, sensitivity and a sense of proportion. Men can do that too. Personally, I usually work with a male assistant, so the actors have a choice and can decide for themselves whether they prefer to be “wired” by a woman or a man.

SchspIN: It says on your website: “We want to encourage young women to take up sound professions”. Where is the greatest demand at the moment, whether for women or men?

CLAUDIA: Currently there is a great need for sound assistants / boom operators. There is far too little young talent in this area.

SchspIN: There are many Youtube women who produce their own videos and audios. Perhaps this shows that the technical threshold is no longer so high. What could attract girls and women to film sound professions and what are the most important required qualities?

CLAUDIA: The film sound professions are more creative than their reputation. Technical knowledge and skills are a means to an end. Just like, for example, graphics software for graphic designers. In my opinion, the most important characteristics are: Curiosity, pleasure in sounds, tenacity and perseverance. Regulated working hours are probably the exception, interesting people, funny, exhausting, exciting, boring, extraordinary situations, moments and encounters the rule.

FELICITAS: The qualities required for film sound professions result from a combination of technical know-how and creativity combined with empathy. Only if the mood and atmosphere are positive, whether on a set or in the studio, and the performers feel comfortable, do I get good sound recordings.

SchspIN: And why did you become a film sound woman?

CLAUDIA: I’ve always been interested in sound and technology. But I only figured out in my mid-thirties how to make it my profession. I found a concert sound engineer in Switzerland who took me with him and trained me. After three years on tour with him I wanted to work in a studio. That’s how I came to Hamburg. There I set animated films to music and then trained as a media designer for picture and sound at Studio Hamburg. I‘ve always loved new challenges.

FELICITAS: I came to sound through music. I played the piano for a long time and after my training in sound engineering, I ended up in a film sound postproduction company by chance. A few years later I completed a Sound-Studies-Master at the UdK. Using my well-trained ear in a creative way to make films emotionally experienceable and to create new sounds is a challenging and beautiful task with every film.

SchspIN: What has been the response among colleagues and generally in the industry to the “women in sound” project so far?

FELICITAS: I‘ve received very positive feedback from many of them. But I also often hear that women* are afraid of being placed in the “feminist corner” when they are visible on our website. They are afraid of getting fewer jobs. I find that very problematic. Actually, it should be the other way around, right? Those who don’t clearly commit themselves to feminism shouldn’t get any more jobs and certainly shouldn’t be in decision-maker positions.

SchspIN: Thank you! And all the best for your network.