Before the year 2019 ends, – but not yet the decade! – here is a short update on the ARD series TATORT (German top TV cop drama) and the female writers’ initiative Tatort: Drehbuch.

I already analysed TATORT several times under different aspects, such as the percentage of women in 6 departments and in the main cast, from 2011 onwards, and also looked at the situation in the different TATORT regions. For example:

The reason for this is not that I’m a TATORT fan or love crime fiction, and not even because it’s considered the most prestigious fictional TV production (with the highest wages on public TV?) – but one of the reasons is that the data output is so convenient which makes analysis easier. There are the TATORT subpages on ard.de, where all films (90 min individual episodes) of the last TATORT years are listed. That’s great, because if I wanted to analyze the ZDF TV movies of the week, for example, research the titles alone would take a lot of time as they are not systematically listed online. For the TATORTs they give the main cast as well as the film titles and usually three to four team positions: director, writer, DoP and composer. TATORT fans can also find photos and synopses and interviews and information from the shootings and the music titles used. Good service, thanks for that!

Today I’ll first present the 6-departments-check for the 37 TATORTs that were first broadcast in 2019, set in 20 different cities. The most frequent ones were Cologne and Vienna (three times each). The percentages of share of women and men are shown for the departments: 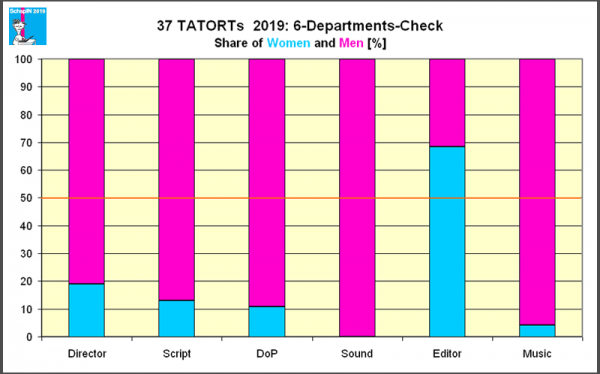 As is probably well known by now, the percentage of women graduating from film schools in directing is 44%, but the percentage of female directors for the 2019 TATORTE is still much less this, not even reaching the low Degeto’s (big production company) target of 20%.

In screenwriting, women make up almost half (48 %) of film school graduates, and in 2019 the share of women writing TATORTs has almost doubled compared to the previous year. This is not a great achievement, however, as in 2018 the figure was so low that this year’s figures are still well under a third of the female graduates’ percentage. But in the second half of the year, two TATORT scripts that premiered had been written by women only: DAS LEBEN nach dem TOD (Berlin. Sarah Schnier) and BAUM FÄLLT (Vienna. Agnes Pluch), in the first half of the year female authors were only found in mixed teams.

As far as cinematography is concerned, the good news is that for the first time a woman filmed a Weimar TATORT: Aline Lazlo did DIE HARTE KERN, with Cornelia Janssen in Ludwigshafen (MALEFICIUS) and Eva Katharina Bühler in Berlin (DAS LEBEN nach dem TOD), two other women were behind the lens in the second half of 2019.

The next diagram shows these results along with the statistics of the last 9 years: 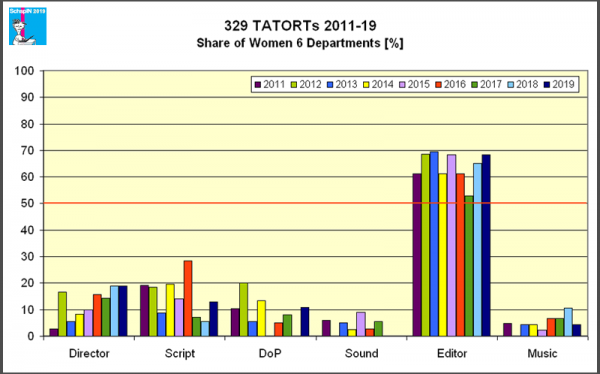 Three of the six departments in 2019 have reached a share of women that is above the average for the eight previous years. These were directing, DoP and editing, as the next diagram shows – the trend being that the main focus is on female directors, not generally on getting more women involved in hig team positions in the making of the TATORTs:

In case you’re wondering what the 2019 POLIZEIRUF 110’s were like (that’s the other important 90 min. cop drama, aldo set in different regions and broadcast Sunday nights at 8.15): There were eight of them total, all with male directors, all with male composers. One woman each was head of a camera and sound department – Leah Striker filmed DUNKLER ZWILLING and Petra Gregorzewski was sound mixer for ZEHN ROSEN. Even better numbers in the script department, where the female share was 30.8 % (Katrin Bühlig wrote MÖRDERISCHE DORFGEMEINSCHAFT, plus there were two mixed teams: Christina Sothmann, Lars Jessen and Elke Schuch wrote KINDESWOHL and Sija Clemens, Stephan Rick, and Thorsten Wettcke TOD EINER JOURNALISTIN.

All the first-mentioned roles in the eight POLIZEIRUF are female. I am a little bit surprised, because some time ago someone from the Rostock-POLIZEIRUF told me that Charly Hübner always has more shooting days than Anneke Kim Sarnau, who is nonetheless listed in first place (they are the two leads). But maybe this has changed in the meantime. Or, as with ZDF television films, actresses are automatically named first for duos.

By the way, my hope for the first Munich POLIZEIRUF with new investigator Elisabeth Eyckhoff (Verena Altenberger) has unfortunately not been fulfilled. I wrote in Polizeiruf 110: The other Top Cop Drama:

In the last case of Meufels (Matthias Brandt, 57) at the end of 2018, Maryam Zaree (35) played his colleague. Her character Nadja Micoud was unfortunately shot in the line of duty, because of the negligence of her colleague Meufels (…). I hope that in the first case of the young successor they will at least mention a disciplinary investigation on her predecessor.

During the age analyses I noticed that some acters had been cast for supporting roles in different TATORT regions. Mostly they appeared twice, one female colleague even in three TATORTs (Stuttgart, Weimar, Frankfurt / Main). This keeps the audience agile (“wasn’t he blablabla in the TATORT two weeks ago?”) but of course it also shows that all TATORTs are independent productions. That’s why a quota is harder to implement than a task for everyone (like my suggestion #2v6pN) and maybe it’s also the consequence of the limited acters’ pool, which is rumoured to be the practice for main and important supporting roles in German public television.

The next figure shows the age distribution of the 175 actresses and 269 actors listed for the main casts of the 37 TATORTE 2019 (I couldn’t determine the age of 4 men and 1 woman). The distribution is similar to the summer distribution after 22 TATORTs (see Germany’s Top TV Cop Drama, Locations, Trends and Surprises): younger women – peak in the age group 36-40 years – and older men – peak at 56-60 years: 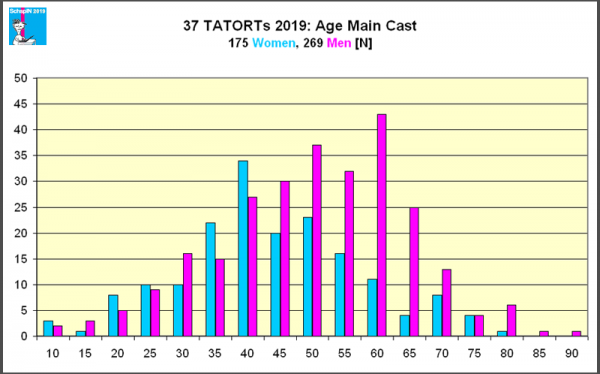 Again I also compared the first listed roles and the main casts, with the main cast defined as the roles that appear on the ARD website. The next figure shows the statistics for 2019 compared to the mean values from the TATORTs 2011-18, the picture speaks for itself – and yes, the orange line indicates the 50 % threshold: 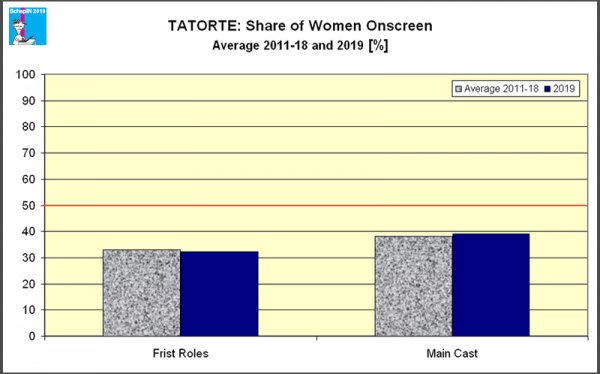 Once again: And what about the Script Writers? 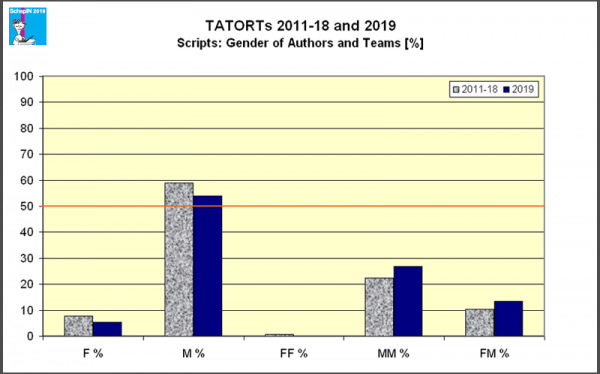 Conclusion 1: The already poor figures for scripts written by one or more female authors have fallen even further compared to the average for the previous years. Conclusion 2: In 2019, men wrote in teams more often than in previous years.

“Why aren’t You working with Female Scriptwriters?”

I would like to take up the title of my article from April 17th this year about German and British women screenwriters, who did not want to accept their severely disadvantaged situation and turned to the broadcasters and also to the (industry) public. Why do TATORT comissioning editors and production companies so rarely / reluctantly hire female authors? Why don’t they have them on their agenda? Do they trust them less? Don’t they know any? Or is it the other way round, do females authors stay in hiding and don’t want to write for TATORT? Ha ha, that’s a joke.

More than 80 writers signed an emergency letter to the ARD broadcasting stations in which they addressed the desolate situation for female authors at the TATORTEN and demanded 50:50 distribution of contracts for TATORT scripts (I published an English translation of the letter on my blog in April – the orginal German version can be found there as well, and of course on the website of the initiative tatort-drehbuch.de).

They waited a long time for answers, and when they got them, they seemed more like appeasement than the start of a dialogue. The initiative finally felt compelled to write an open letter (in German) in November, which states, among other things:

(…) in March of this year we wrote you a fire letter signed by 83 screenwriters and informed you about the structural discrimination of women in the awarding of TATORT and POLIZEIRUF screenplay contracts. (…) In your reply you wrote that creativity cannot be forced into a gender quota. Now, about 6 percent of female screenwriters, compared to 94 percent of male screenwriters in 2018, can hardly be justified by the fact that decisions were made solely on the basis of artistic quality. Only greater heterogeneity in the distribution of contracts means that television represents our society in all its diversity. Unlike German television, society has long been diverse. We are happy to get involved in talks about content, role models and perspectives. As the highest representative of the broadcasters, you have it in your hands to lay the foundations for initiating the necessary cultural change. 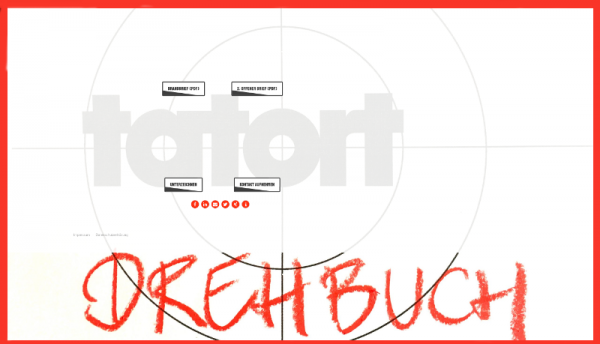 The website is currently still quite minimalist, the initiators have expressed their views in more detail in interviews, for example with blackbox, the Frankfurter Allgemeine Sonntagszeitung and Deutschlandfunk Kultur. To read/listen to it here (all in German)

Whoever wants to support the initiative Tatort: Drehbuch can do so by signing their letter, no matter if they are an author, another member of the film industry or audience. On the (only German) website of the initiative you can find all necessary information, basically just send an email with the subject “Sign” with your full name, and optional information such as place of residence and profession to them.

I very much hope that 2020 will be the year in which the concerns of the female authors are taken more seriously and that the TATORTORTs will stop being a male affair. Incidentally, too many cop dramas are produced in Germany. Television can do better.