On Feb. 1 I was listening to a literature show (LESART) on a German public radio station (Deutschlandfunk Kultur) when I noticed that the report on political books was only about men. I checked the website and for sure it was monogender: 0 women 7 men, 4 male authors, 3 male reviewers. I tweeted my dissatisfaction: 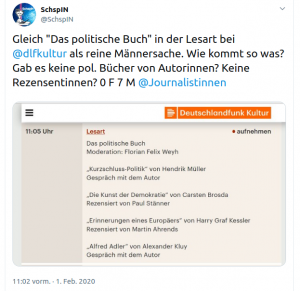 A few weeks later Tarik Ahmia of the Deutschlandfunk editorial office „background culture and politics) contacted me and asked me to write a commentary for the programme slot Politisches Feuilleton / Political feature pages. He told me that I had been recommended by colleagues of the LESART because of my tweet (which they had answered to before: “We strive to offer a varied and balanced programme, also in regard to the gender of authors and reviewers. To our regret, however, this cannot always be implemented in day-to-day business. But we are doing our best!”

With kind permission of DLF here‘s my commentary, which can also be heard as a podcast on the DLF website in German:

Female Characters in Film and Television – the Stereotypes live on

“Is she going to be murdered or does it turn out she’s a prostitute?” – Apart from a few lighthouse projects for the advancement of women, women’s reality in film and television looks bleak, criticises Belinde Ruth Stieve: Women onscreen are best young, pretty and silent – or even dead?

Film and television could do more, but when will they start? There is this joke where a little boy asks his father: “Can men also become female chancellors?” (the joke is funnier in German where we‘ve had a female head of government – Bundeskanzlerin Angela Merkel – for nearly 20 years now).

What we experience, what we see and what we don’t see, shapes us, our thinking, our view of the world: when paraplegics predominantly want to die on television, when black Germans only appear as taxi drivers, Arab-German men as drug dealers or murderers, Turkish-German young women wearing headscarves and oppressed by the men in their family, Polish women as prostitutes – and women in general are only shown young and pretty and ideally silent or dead, then of course members of these groups know that this is not true or only show a small part of their diversity. But many others accept this as a reality that does not exist.

For example, as far as women are concerned: we make up half of our society in all age groups, but film and television easily show twice as many men in fictional programmes. Women usually embody smaller subordinate roles and are predominantly restricted to the age segment under 40. Men talk, women listen, men act, women look good. This has been the case for years, for decades, and empirically proven, a change is long overdue.

The situation is just as bleak off-screen. Even though a little bit of gender politics seems to be quite popular at the moment. Let’s take the TATORT / Crime SCENE (Germany‘s Top cop drama):
Recently a 20 percent target for female directors at TATORTs was announced. And this figure has almost been reached, with 19 percent in the last two years. That’s not really that wonderful considering the 44 percent of female graduates from film schools, but it’s a first mini-step. However there are possibly some side effects, since at the same time, fewer and fewer female screenwriters were allowed to write the “crime scenes”. To give you the statisctics: in the last three years the proportion of men responsible for the screenplays were 94, 88 and 87 percent. So half the talent, half the creativity is being given up, considering that the percentage of women in screenplay course at film schools is almost 50 percent.
When people talk of “films by women”, they usually refer to directing only, and with the cast the focus is only on the leading roles. That’s why we now have a number of – predominantly young – new “Tatort” coppers. And that‘s we get cinema blockbusters with a young protagonist where the rest of the cast remains male-dominated, the stories male-centered and the visual language as well. But doesn‘t the audience, don’t we all deserve something new, something better?

The Audience Deserves Something Better

Film and television do not have to reflect reality, they can create new worlds that are better, more developed, different. And, of course, societies that are worse than ours. But they can also show our world in all its diversity, and overcome eternal stereotypes and clichés. The image of women in the 1950s has become obsolete in contemporary films. As has the alternative “Is she murdered or is she a prostitute?” Women can do more. Women actually do more. And the audience – regardless of gender – is accustomed to encountering all kinds of women in all areas of real life. Even as head of state. So please: “Action!” 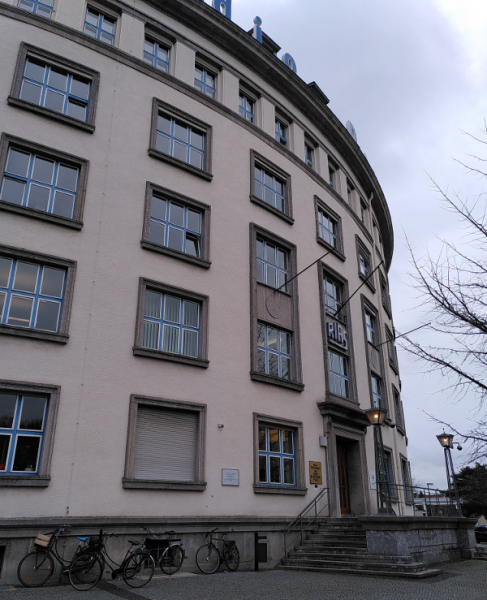