I met Karin Hanczewski in February 20, during the filming of the web series #HEULDOCH – THERAPIE WIE NOCH NIE which was still called PRICKS at that time, and which was screened at Cologne Film Festival and on ZDF Kleines Fernsehspiel since then. Until next year, the mini-series – 5 x 15 min – will still be available in the media libraries of ZDF and arte.

The series “#Heuldoch – Therapie wie noch nie” is a satirical take on #metoo. Watch it! However, I would like to issue a trigger warning: for those affected by sexual assault or worse, it is sometimes hard, despite all the humour. 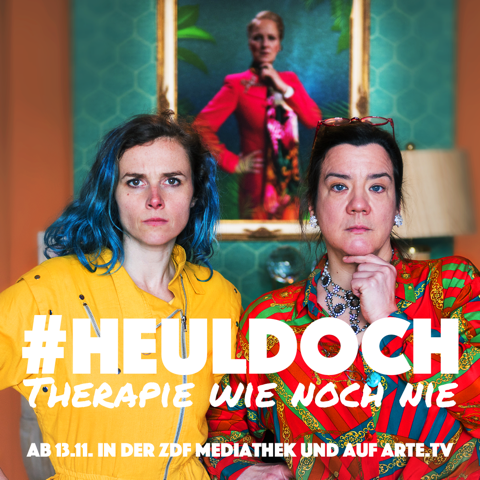 From left to right: Karin, me, Bärbel

It was one of the last productions to be shot before Corona, the team was great, the cast anyway – starring Bärbel Schwarz and Karin Hanczewski, with whom I shot most of my scenes. I still remember exactly how Karin greeted me in the courtyard of the great estate that was our filming location most of the time:

Karin: Will you bake me a cake then?

Me: Uh, yes, absolutely. How old will you be?

** I wanted to be nice, I wanted her to like me more than anything, because I’d read the script and there were some scenes where I was literally in her hands. In fact, I would guess she was at least in her mid-40s, because I saw her several times before she went into make-up.

Karin is a very nice, friendly, thorough and sensitive colleague. It was a lot of fun shooting with her, with her and Bärbel, with whom I also had a few individual scenes in a frosty atmosphere – haha, I’m kidding! Do watch the series sometime and you’ll understand what I mean.

I remember one scene in particular, my character had just fainted and Karin and Bärbel’s characters were supposed to carry me down a flight of stairs and put me down on the floor. This shot was repeated what felt like 30 times, because the two directors also worked very precisely – Isabell Šuba and Lilli Tautfest. Both were also very nice, but rather superstitious, like many artists. For example they didn’t wash their hair during the whole shoot, but fortunately they always had caps on.

Anyway, Karin and Bärbel carried me down the stairs again and again, put me down, turned me around, pulled me across the floor, put me down again. The whole thing was to be shot in one take. The director’s instructions were that Karin should “drop my feet” at the end (she was at the end of my feet, Bärbel at the side of my head). This was no problem for me, I am well trained, I was able to catch my feet so that they virtually stopped in the air just above the ground. But Karin was worried about hurting me, afraid of the sound of my heels possibly hitting the stone floor. The scene was repeated and repeated over and over. Again and again Karin carefully placed my feet on the ground. In the end it was divided into several takes, for the last short passage my stunt double had to do it. But I don’t think anyone noticed. 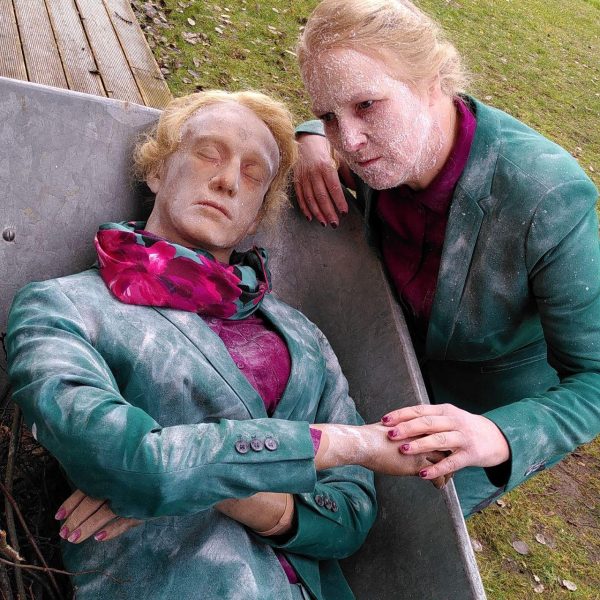 During a break. My Stunt double and me. Foto: Antje Volkmann, our woman sound mixer

Why am I telling you all this? For one, because I’m regularly asked not only to publish statistics in the blog, but also include a bit more “film atmosphere” and personal stuff (the most recent, I think, were the texts Blimey, this is so German…  and Write a Blog and Ride a Porsche). And secondly, because today is 22 December, and that is – right! – Karin’s what’s-her-age-now birthday.

Happy birthday, dear Karin, and all the best for the new year.

You are a great colleague and a great actress! Unfortunately I haven’t seen much of you yet, because I don’t watch TATORTs (she plays an investigator in the Dresden team of German Top Cop Drama Tatort / Crime Scene), but I know you from the TATORTCLEANER, and of course the great helicopter children’s sketch on KROYMANN. (Some time ago, when I met Ms Kroymann personally at a political event, I talked with her and asked for a role – you don’t really do that, I know. I don’t think she found that too bad and just asked whether I could do comedy at all, and I wasn’t a celebrity either. She was right, of course. Instead, I got a temporary job – for four months! – as a warehouse helper. I almost drove a forklift truck, but you need an extra driving licence for that. But otherwise it was really good. Maybe I’ll play something like that in a film one day, and then I’ll have already done the research.

Anyway, Karin was really cool and funny – with glasses! – in the sketch, she plays a daughter who supervises her mother and prepares her for old age. Yessss!

Speaking of old age, happy anniversary again – and much success and luck and grit and fun and health for the new year of your life.

(I don’t know if such a blog text is a bit too pushy, but I didn’t have your phone number).