No April Fool’s joke: half of the TATORT screenplays by female authors – #jaesgeht

On 1 April, I posted the ARD news on Instagram that half the top cop drama TATORT’s scripts will be by female authors, i.e. written by one or more women in  2022. Not by mixed teams, but without any men at all: 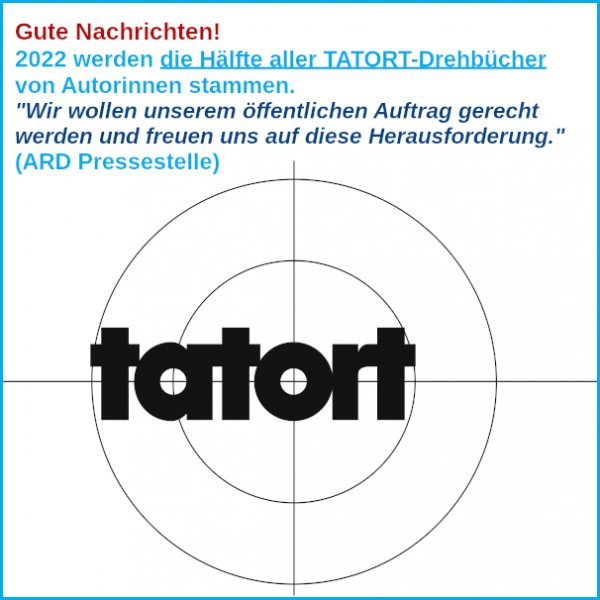 This post was liked umpteen times and also shared in various Instastories. The only criticism of the post, which was voiced several times, related to the half-sentence “and we are looking forward to this challenge“. Because really, what is supposed to be a challenge about finding female writers or teams of female writers for 18 scripts?

The question of an April Fool’s joke was raised twice, by crew united and by composer Verena Marisa, who had even looked for a press release from ARD and found none.

The ARD or the Tatort-Instagram account, which were tagged, did not react. Neither with a “Good idea, we’ll do that“, nor with a denial, nor with a “Haha, funny“.

Because in fact, it was an April Fool’s joke. And such a joke works best when the message is outrageous but not improbable.

Years ago, Radio Bremen 4 (a pop music public radio station) broadcast the news that the Kelly Family were moving to Bremen with their houseboat, all day through all shows. With outside reporters on the Weser and the full programme. That was almost tragic, because a lot of fans had gathered at the pier and were eagerly waiting for the singing family. Children said that Kellykind Sowieso could come to their class and sit next to him. Touching.

Yes it is possible

There are women writers, they just don’t get hired. Or don’t they want to be? Really? They don’t want to work for a show that probably pays the highest fees in German public television? Sure, there are some for whom that is true, women as well as men. But there are still enough left. And 50 % in 2020 only means that female writers or teams of female writers have to be found for almost 20 projects who can write good (maybe even really innovative) TATORT scripts. That really should be possible. I am repeating myself. I know. And I’m already bored myself.

And yes, when half of the scripts are written by women, 80 % or more of the commissions can no longer be given to men. That is simple maths. And yes, that is disappointing and perhaps also financially hard for many a writer who in the past could rely on being able to sell one or more scripts to this showt every year. Yes, there is this habit, these connections, but no right, no permanent claim can be derived from it. Fortunately, times are changing, public television can and must no longer cater only or primarily for film men. This discriminates against film women and leads to a poorer television for the audience.

So please, ARD and all regional broadcasters: let the April Fool’s joke become reality, don’t stop at the point of “more female directors”, at least as important (nope, more important!) in my eyes is a change in TATORT stories to finally break the eternal male gaze. I recently heard from a female director that she only takes on TV films if she has the right to rewrite the scripts, because they often wouldn’t work at all the way they were offered to her. But that’s a topic for another day.

How about calling for female writers to write exposés or treatments for your TATORTs? Definitely for all TATORT cities with two episodes that year. Then definitely Wiesbaden (in all 9 episodes 2010 – 2020 there has never been a female scriptwriter, not even as a writing team). And Cologne, if I counted correctly only 4 of the 81 episodes from 1997 to 2021 were without male scriptwriter participation. Or Münster: since 2002, only two of the 38 episodes have been written by women. Or Lower Saxony: since 2002 only 6 of 28 episodes by an author, the last time in 2010. Or Stuttgart: 27 episodes since 2006, once by a female author, Katrin Bühlig with ALTLASTEN 2009. Oh, actually, some action is needed in every region.

Hiring Calls are the passive way, but the responsible editors can of course also search actively. But that is not as easy as I would have thought. In the authors’ guide of the German Screenwriters’ Association, all authors are listed alphabetically, but I can’t search for female authors separately. This is also not yet possible in the Crew United database, which is a pity, because in both cases the corresponding vitae would be linked immediately. I was told by Crew United that this option (for all departments?) will be integrated with the next update, probably at the end of May. Good!

I would also like to mention the letter to Volker Herres et al. from the Tatort: Drehbuch initiative, a good 70 female scriptwriters are listed as signatories at the end of the letter (a total of 83 signatures), but without links to their CV or websites.

Perhaps it is time for the women screenwriters to get organised in a similar way to the women cinematographers and the women film sound network and make themselves visible. If it helps to be found. And finally, I would like to mention Scriptmakers by Sandra Ehlermann: – this is, however, a paid service through which authors can be found, alone or by so-called “author casting”. “Scriptmakers offer a neutral interface for professional screenwriters and their clients. The demand of the client is in the foreground. For the authors, this means a real chance of getting a job.” – the professional female writers are included, there are more than 200 of them in this database.

What can you do?

If you are cast as a TATORT copper, ask why there aren’t more female authors writing your stories. If you watch TATORT, are an author or otherwise interested in the topic: talk about it, write about it, demand the 50% for female TATORT authors. If possible with the hashtag #jaesgeht, (yes it is possible) because it really is.