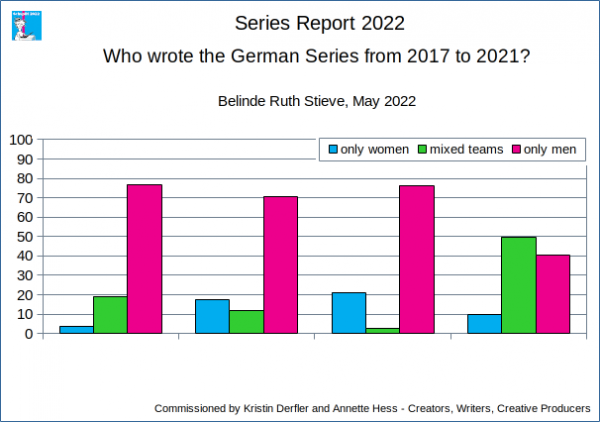 Study on the participation of female writers in the creative areas of script writers, creators, showrunners and headwriters of publically funded and non-funded German series for streamers or VoD providers, private broadcasters and public television.

So far no English version of the report available.

The different participation of women and men on and off screen in the German film and television industry has been a topic of discussion for quite some time. At first, the focus was on directing, while scriptwriters and related fields such as creators of series were often only mentioned in passing and not yet examined in depth. Yet they are the ones who create the stories, the ones who should get the label “a series by”. Consequently, an answer to the question of whether gender imbalance continues to exist in scriptwriting and to what extent is long overdue.

Series of every genre and format are what novels used to be in former days; they entertain, mirror the familiar and can be the “Bildungsroman” of our time. Fictional narratives help to build identities. So it is glaringly important to look at the people in whose minds the characters and stories are created. We have been observing for years that significantly more male authors are commissioned and promoted with series. So we wanted to check if this perception was true.