The Film Industry in Corona-Standstill

For weeks and months we‘ve had the – now fading – corona alarm and corona standstill, or whatever this phase will be called in retrospect. The film and television industry paused for a long time and was held in some kind of waiting mode, even more actors and actresses than usual were without work. Only a few productions continued shooting after a while, e.g. Dresden TATORT (“Rettung so nah”), early evening series like NOTRUF HAFENKANTE and telenovelas like STURM DER LIEBE and ROTE ROSEN. Gradually more productions are starting now, but still with the great uncertainty of how to protect the health of those involved and whether health really is a priority and with the task of having to rewrite scenes, and change of how many scenes have to be rewritten, how the staging and directorial ideas and concepts need to be changed in order to abide the new safety guidelines.

Seize the Time! Opportunities and Chances

It was and is of course completely ok to do nothing at all in this standstill except to go for a walk and eat chocolate. Or taking care of the family or just getting along with everyday life (to observe something as simple and sensible as distance rules seems to overtax or provoke many fellow men, which can lead to considerable stress).

The emergency break was used in different ways within the film industry. Distributors and production companies were waiting for new cinema release dates for their films or moved them to streaming platforms. Others were and still are in the starting blocks, ready to continue projects or finally get the go ahead for them. Casting directors familiarize themselves with lesser-known actors and view their material with more time than usual. Scriptwriters, editors and production companies can spend more time on material and reworking scripts in the extended pre-production period (how often are books rewritten after shooting has already started!) Filmmakers revise their material, actors produce new video clips (e.g. for the actions #wirspielenzusammen and #becreativeathome) or participate in one or more of the countless, mostly newly created online training courses and workshops.

In the film and television industry, for example when putting together production teams, (too) much is (too) done with vitamin B. How about vitamin N instead? Directors, producers and editors can find out how many film people they don’t know, especially how many competent film women there are, and discover them for possible future projects. There aren‘t any female DoP‘s, sound mixers or composers for film music? Oh yes there are.

Let’s Continue, but in a Different Way

We all hope that at some point in time the everyday life of film making will begin and be filmed again, often coupled with the justified wish that things will turn out differently than before. I, for example, wish for models like the 8-hour shooting day that has long been normal in Denmark and probably Norway, and as an actress and part of the audience, I wish for more courage for other faces and other stories. Just to name two wishes. (More on request!)

Interest groups and other organisations are developing ideas and launching online petitions and calls, partly for funding, partly for how it is produced, what, and with whom.

The disadvantage and related under-representation of women in film has been extensively investigated and proven; now changes, improvements, remedies, solutions are needed. In mid-May, Pro Quote Film launched the call “When the film world starts up again, then only with Quote! Maybe because there are currently even more petitions than usual. And even more newsletters, even more digital information. And Christian Drosten, who together with the science journalists Korinna Hennig and Anja Martini was nominated for the Grimme Online Award for the NDR – Der Coronavirus-Update Podcast; you have to check and vote for all the nominees. Perhaps also because appeals, no matter how justified and argumentatively well formulated they may be, usually lack the decisive lever for implementation.

Behind the camera, gender quotas make sense, although it’s one thing to do with concrete implementation. That’s why some time ago I brought into play the proposal #2v6pN Two of Six (plus NEROPA), to which every production could voluntarily commit itself, from now on at once. This would require no great effort, no additional money, no overall view of several productions or broadcast slots. Because it is created individually for each production. Of course, a six out of fifteen or whatever is also possible. And no, I do not think it makes sense at this stage to demand 50% of all Heads of Department for women. We can discuss this in more detail another time. Just this much: For #2v6 I have taken into account that only 25% trained camerawomen and only 11% sound engineers leave film schools (there are no real training figures for film composers), so not three out of six. But don’t worry, #2v6 in German film and television would already be a small revolution. As a reminder: 71 % of the Top 100 German cinema films in 2018 and 73 % of the TATORTE 2019 did not reach this level, there was one or no Head of Department in the trades direction, script, camera, sound, editing and music. TATORTE are financed with public money and the vast majority of cinema films have received money from some source – be it film funding or the participation of public broadcasters. Surely a linkage to basic constitutional values (e.g. to Article 3) could be incorporated into the assemblance of a film team.

Here, too, there is the possibility that an individual production may work with the method or that an editorial department or film funding body may make it obligatory to work with or apply NEROPA.

More Female Variety in Front of the Camera

A 50% quota for women’s roles can of course be a good demand, but the implementation is not as easy as it would be if the team positions were behind the camera.

That’s why I invented the NEROPA Neutral Role Parity method, which in the first step (NEROPA Check) reduces the usual male overweight in scripts in favour of female roles, so that we get more female age diversity and more female characters with a profession. And in the second step (NEROPA fine-tuning) the diversity of the character ensemble is expanded. 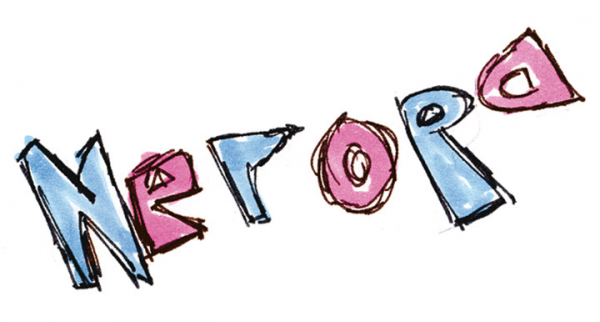 Of course directors and scriptwriters can also work wih the method! 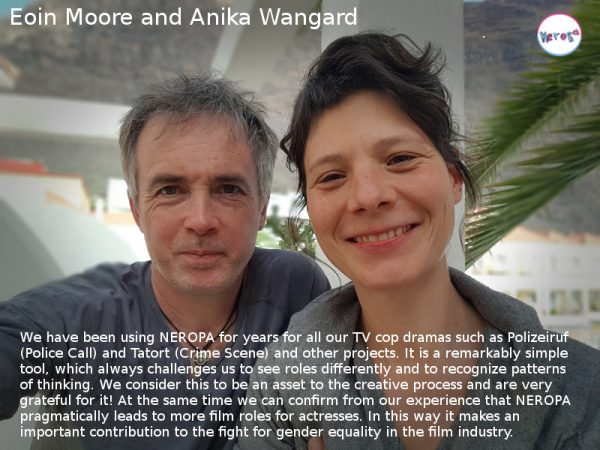 NEROPA is effective, colourful and fun.

Women and Other Minorities