It is with great pleasure that I can report that the German chapter of Women in Film and Television, WIFT Germany has made me an honorary member. Many thanks for this great honour!

I have been in contact with WIFT Germany and WIFT UK on various projects for years. I think the first time was six years ago in January 2014, when a panel discussion on “Who plays a role in German television? The image of women between television reality and reality”, organized by WIFT Germany. I was also a panelist, delivering figures and thoughts from my blog. (read more in the old article Women’s Patience is Men’s Power).

From the current WIFTG newsletter / Aug. 11.:

The actress and expert for gender issues in film and TV has been writing about the situation of women in the industry for many years in her blog “SchpIN – An Actress’s Thoughts”. We look forward to her contributions to the 50th anniversary of the German cult police drama “Tatort” (crime scene), where we see many female corpses but few female filmmakers. 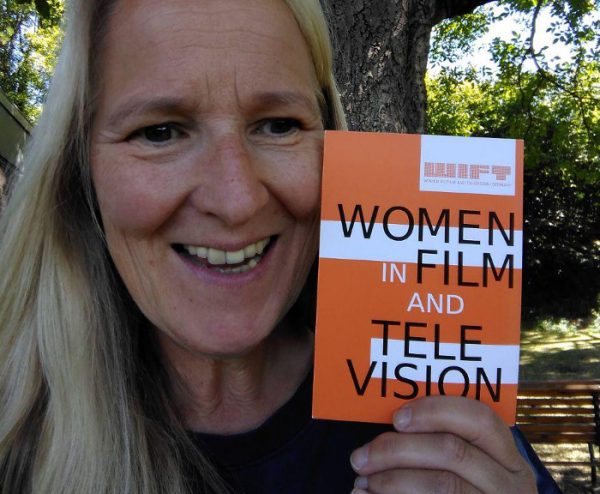 Indeed, exclusively for WIFT Germany, I am currently investigating a list of 50 films, i.e. 90-min episodes of TATORT / CRIME SCENE, through the film women‘s looking glass. This list is a pool of films for the public to vote their favourite ones from, and the ones with the most votes are broadcast over a number of sundays during the show‘s summer break. These texts will first be published on WIFT Germany‘s social media channels (Instagram and Facebook), and after that in greater detail here on my blog SchspIN – An Actress’s Thoughts.

Partytime at the TATORT

The TATORT series is very popular with German-speaking audiences in Germany, Austria and Switzerland. And also with filmmakers, because a TATORT job is very good for the CV; and on top of that, in many positions in front of and behind the camera you can earn considerably more than in other German 90-minute television film productions.

In 2020 the TATORT will be 50 years old, and for this occasion the ARD has organized a “Wunschtatortvoting” for the summer break, where they don‘t broadcast new cases – there are on average about 35 TV premieres every year. The 50 most popular episodes of the past 50 years were up for voting. No. Not true, they were from 1999 to 2019 only, so from 20 years. And it weren‘t the overall 50 most popular film – that is to say, the ones with the highest overall so-called TV ratings – but the most popular from 23 regions, so that all regional broadcasters are happy and that all fans of certain cop teams or cities can be happy as well.

For the German public broadcaster ARD, the team positions director, author, director of photography and composer seem to be the most important – that‘s what I‘m guessing at least, since for these positions they publish the filmmakers on the TATORT website. So let’s take a closer look.

50 TATORTs, great! I wonder how many women were employed and for which jobs? The empirical analysis won’t even be that difficult, because in only 12 of these 50 TATORTs there was a female participation in at least one of the four departments. We are celebrating the 50th TATORT birthday, translated into a cake – which is classically divided into 12 pieces – the film women get 3 pieces. Hmmmm!

Not surprisingly, there is no TATORT with women in all four positions. One episode from Leipzig, FRÜHSTÜCK FÜR IMMER, had a female director (Claudia Garde), a female scriptwriter (Katrin Bühlig) and a female camerawoman (Birgit Gudjonsdottir), i.e. three departments; and four TATORTs had females in two departments each.
So we‘ve baked a second 12-pieces cake, and offered it to all filmmakers in the four trades for the Wunsch-TATORTs. Of this cake the 19 female directors, screenwriters, DoP‘s and composers can share one delicious piece. The 211 men get the rest. Bon appetit! 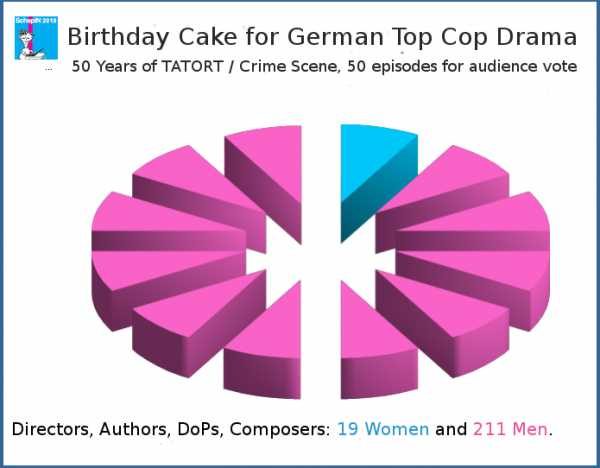 By the way, out of the twenty-three TATORT locations, only two – Bremen and Saarland – had female involvement in one of the four departments in their two episodes; namely as scriptwriters alone or as part of a mixed team.

Comparing the Wunsch-TATORTs with the films from 2011-19

I have been investigating TATORTs several times in the past, for example all premieres over the period from 2011 to 2019. The most recent article – Once again: TV‘s Crime Scene TATORT – contains links to other articles.

Out of the 329 TATORTs 2011-19, I have identified those in which women were solely responsible for the top four trades. There are three TATORT locations – Hamburg (5), Erfurt (2) and Wiesbaden (7), that come up to four zeros here. Northern Germany (12) and Stuttgart (17) each have three zeros, meaning that in the period 2011-19 there were only one female filmmakers in one of the four departments. No cause for a party here.

In the second episode we take a look at the directors of the 50 Wunsch-TATORTE.