TATORT Script Writing – Piece of cake for Everyone?

50 TATORT Episodes up for the Summer Vote

Of all writers of the 50 TATORT crime scene episodes up for the summer vote, the female script writers make up 15.2 %, that is two pieces of cake, one regular and one slightly smaller. 5 TATORTs were written by women: TODESBRÜCKE by Frauke Hunfeld (Berlin 2005), IM TOTEN WINKEL by Katrin Bühlig (Bremen 2018), DER FALL REINHARDT by Dagmar Gabler (Cologne 2014), FRÜHSTÜCK FÜR IMMER also by Katrin Bühlig (Leipzig 2014) and VERSCHLEPPT by Khyana el Bitar and Dörte Franke (Saarland 2012). In addition, four more episodes were created by woman-man writing duos. The remaining 41 films were all written by men. That means that the absolute majority of the stories, the episode characters, the dialogues were invented by men alone. 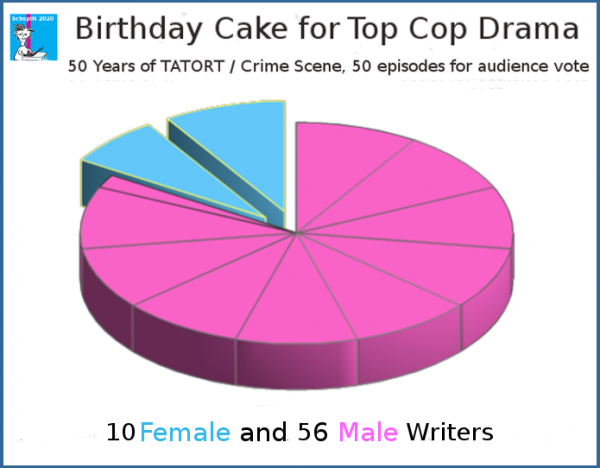 This is not a phenomenon however that only affects the Summer Vote Episodes of TATORT, the ones with the highest ratings from the last 20 years. The TATORT scripts 2011 to 2019 show a similar picture with an average of 14.9 % female writers only. This striking imbalance brought female screenwriters to the plan in the spring of 2019, when they founded the Tatort: Drehbuch initiative (Crime Scene: Scripts) and adressed the ARD stations in an open letter. There, they demanded a cross-format screenplay quota of 50/50 by 2021, and announced the initiation of a round table for a joint action plan 2019 to 2021. (see also Why Aren’t You Working with Female Scriptwriters?). The answer they got was that only artistic quality would be decided upon and creativity could not be put under a quota – but that does not really explain the enormous discrepancy between female and male writers in numbers. In November 2019, they wrote another open letter (in German), which unfortunately has not received much response so far.

The next figure shows the shares of women and men for the TATORTs 2011 to 19, and in the last column for the first half of 2020. The lowest value for female screenwriters – 5.5 % – has only just been eached in 2018 – i.e. after the efforts to get more female directors in the TATORTs were in full swing. The lowest value for male screenwriters – 71.7 % – is for 2016. Just to remind you: at film schools, an average of 48 % women and 52 % men graduate in screenwriting. But somehow the women aren‘t really allowed to have a go at the TATORTs, Germany’s top TV cop drama. 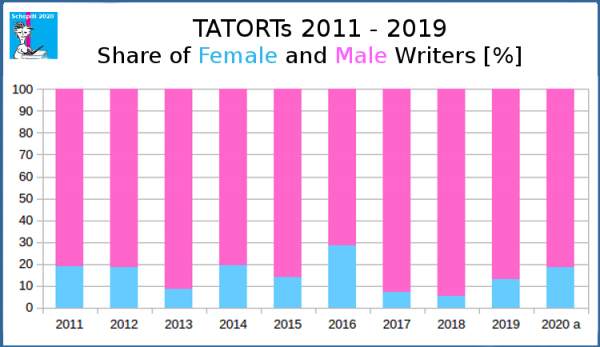 As for 2020 and the TATORTs of the first six months, with their female directors‘ quota of 47.6 %: well, as far as screenwriting goes it remains a men’s club. Female writers were only involved in male-female-teams in five out of 21 TATORTs, not a single one of these cop dramas was written by a woman or two women. With a male rate of 81.5 %, it is difficult to reconognize any determination to do more towards change, equal opportunities and narrative diversity.

The last figure in this text depicts the female shares for directing and scriptwriting. From 2011 to 2016, the percentage of female screenwriters is higher than that of female directors. We can also see that from the moment the public‘s and broadcasters‘ focus was put on directing, with a women’s quota being called for and discussed, and public broadcaster‘s production company Degeto started setting its own targets, this ratio reversed. From 2017 to the present day, the share of women for scriptwriting is very distinctly below that for directing. For the first half of 2020, the difference is almost 30 percentage points. This is not a good development because it should not be about either – or, but about as well as. 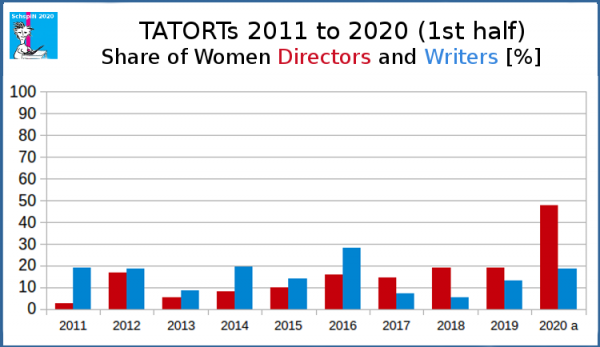 In the 51st year of TATORTs we definitely and finally need more stories told by women. We need a change of perspective. And a quota or target only for one trade – usually directing – is not enough to get diverse stories that reflect our diverse society. I like to leave the final word to the Tatort: Drehbuch female screenwriters:

“The authority of interpretation must not be exclusively in the hands of our male colleagues. Women are not a minority, but public broadcasting makes them one.“