Does it make a difference if a man or a woman is cinematographer of a cop drama? Is the female or male gaze created via the camera lens? And who decides who gets hired for this position?

The first two questions can be answered with yes and yes respectively. The third answer is not so easy, sometimes the director has to choose from a list of suggestions, sometimes they may bring someone along and sometimes someone is predetermined. It is easier to say who is looking through the TATORT lenses, these are mostly men. That may not be so surprising, given the fact that 75% of camera graduates at film schools are men, but something else is.

Let’s take the 50 TATORT (Crime Scene, German top cop drama) episodes up for this year‘s summer vote. Scenes, here we only find three camerawomen, that’s 6% of all DoP’s: Christine A. Maier (BOROWSKI UND DAS MEER and ANGEZÄHLT) and Birgit Gudjonsdottir (FRÜHSTÜCK FÜR IMMER). They get to share a small piece of the birthday cake, – and they all worked in films directed by women (Sabine Derflinger twice and Claudia Garde once). The fourth female director, Christine Hartmann (TODESBRÜCKE) and the 46 male directors all had men behind the camera. 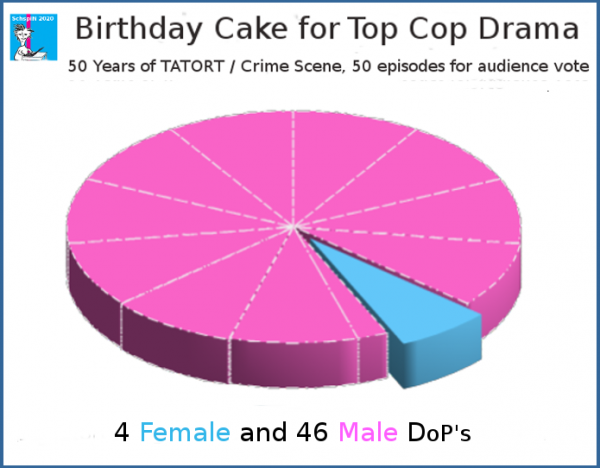 Don‘t men want to work with camerawomen or are they simply somehow unable to? Or is it just a problem of films with high ratings? For comparison let’s look at other episodes of the TATORT series to get further insight: 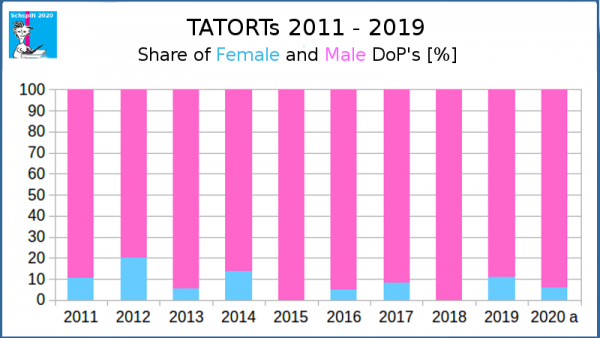 Other than that, the tendency of the mentioned Summer Vote TATORTs is confirmed: Male directors almost never work with female DoP’s, but female directors do. More than a quarter of the female directors (27.6%) but less than every 20th director (4.1%) had a woman behind the lens. No matter if it was a very popular copper team or not. The broadcasters still have a lot of catching up to do, maybe looking at the website of the Cinematographinnen / Women Cinematographers Network, an association of German camerawomen, will be helpful. 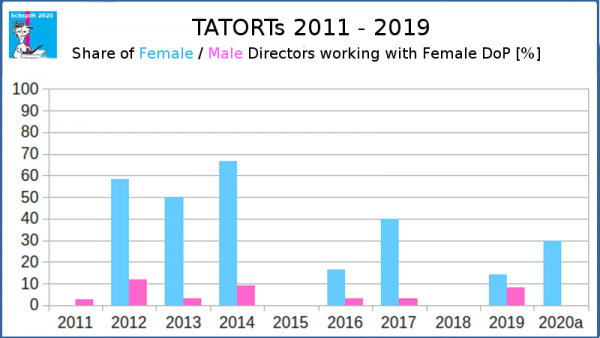 The proposition that films with camerawomen are also successful was just proven by this year’s 77th Venice Film Festival, that just took place: the competition included films by 8 female and 11 male directors. Jasmila Žbanić, Julia von Heinz and Susanna Nicchiarelli worked with the camerawomen Christine A. Maier, Daniela Knapp and Crystel Fournier. However, these were the only camerawomen in 18 competition entries.