There is two kinds of music: the good and the bad.
Louis Armstrong

Today I will not be discussing the question of good and bad music – which is to a large extent a matter of taste and time context anyway – but that of women and men composers of TATORT music. No big surprise, and it sounds a bit like a record with a leap, that the 50 episodes from the Summer Vote pool are also a heavily male-dominated affair in terms of music and composers. Only two female composers are on the list. This time only the cake provides some variety., it is a delicious Baumkuchenring (ring of a pyramid cake), of which the women with their 3.2% can only enjoy a very small piece, of course. 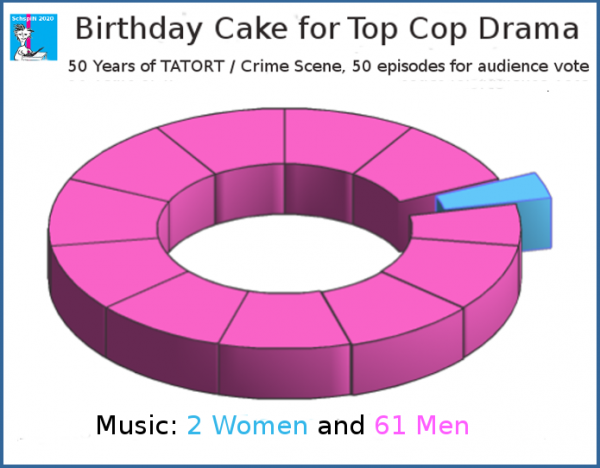 The composers Verena Marisa and Iva Zabkar – both WIFT Germany members! – worked with the directors Max Färberböck (DER HIMMEL IST EIN PLATZ AUF ERDEN) and Umut Dağ (REBECCA). The four Wunschtatorte directors only had musicians in their team. This phenomenon can also be found in the 339 TATORT premieres from 2011 to 2019:

Only two of the 41 female directors had a female composer in the team: Hermine Huntgeburth with Christine Aufderhaar in DIE GESCHICHTE VOM BÖSEN FRIEDERICH 2016, and Anna Zoha Berrached with Jasmin Reuter (also a WIFT Germany member) in DER FALL HOLDT 2017, making a total of 4.1% of all female composers. In the nine TATORT years, a total of 18 men directors worked with women composers, which represents a share of 5.8 %.

The often related opinion that with a female director increases the percentage of women behind the camera does not apply to film music, at least not for Germany’s most prestigious television series. 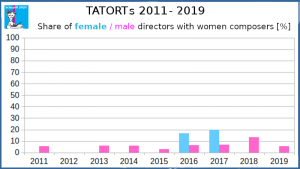 The next figure shows the percentage of women for the 339 TATORT music pieces in 2011-19; there were no female composers in 2012, and in the remaining years their percentage was usually well below 10%. The only exception is 2018 with 10.6 %. 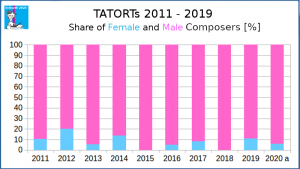 By the way, the data for the first half of 2020 are not yet complete, so I omitted them in my analysis. On the ARD-TATORT website, where the departments screenplay, direction, camera and music are listed for each case, the music position is most often missing. And the gaps could not be completely closed by the databases Filmportal, Crew United or IMDB. Vincent Lutz from Crew United told me that many projects are only incompletely entered in their database, some with only a handful of team positions. Direction and camera are always present, script not necessarily, and music rather seldom – but of course this applies to all projects, including commercials and short films. My research confirms this, music – and also sound – I often have to do extensive research, sometimes only a call to the production company will help, nothing could be found online.
The fact that composers are mentioned less often than, for example, DoP’s, and are therefore less frequently entered into the databases by the productions, perhaps has something to do with the fact that they – like script writers or editors – are not really part of the team, they do not work on the set but at home or in their studio, in pre-production or post-production, or at least ‘somewhere else’, if only during the production phase. 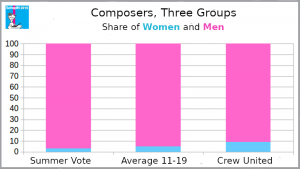 In comparison with the other three departments I examined, it is noticeable that there are more teams and also that the number of film scores per composer is higher. Thus, in the 329 TATORTs a good 170 composers were hired, but almost 110 of them only in one film. 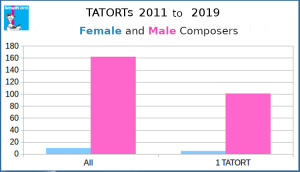 The female and male composers’ top 3 are shown in the next figure. In first place overall we find Swiss musician and film composer Fabian Römer, with 21 TATORTs, 4 of them in a team. What might be surprising: 2nd and 3rd place among the men are taken by teams, Dürbeck & Dohmen and Christoph M. Kaiser / Julian Maas. And what may not be so surprising: The top 3 of the men total 50 TATORTs, which is almost five times as many as the top 3 female composers (11 TATORTs in total). 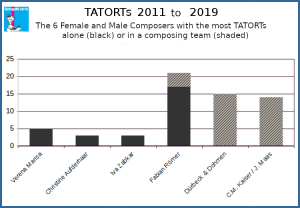 In the nine years there were a total of 10 female and 162 male composers. For comparison: in the same period of time 11 camerawomen and 81 cameramen were used for the TATORT. This does not mean that the DoP were used much more often, but that they usually work alone on the position. The cameraman with the most TATORTs 2011-19 was Jürgen Carle with 14 and the top camerawomen are three with 4 TATORTs each: Christine A. Maier, Cornelia Wiederhold and Jutta Pohlmann.

And finally a look at the Crew United database, where filmmakers can enter their profile, either for free or for a fee. For the statistics on film professions and how many can be found in a department, only paid entries are taken into account.

First the number of profiles. Interestingly enough, there are for the four years that I had queried the data – many thanks to Vincent Lutz for the support and data transfer! – considerably more cameramen and -women than scriptwriters or composers. The profiles of scriptwriters and DoP rise in number, those of composers don’t so much, their average is 279, the lowest value (2017) was 259, the highest (2020) 296. The scriptwriters had the lowest value (255) in 2014, but it got more every year, and in 2020 there are already 423 profiles. 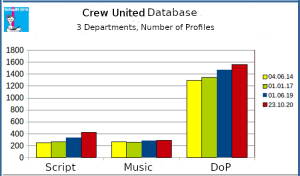 Thinking back again: a total of 172 composers were used in the TATORTs investigated. This means that technically there are still 100 left. And we also know that every year there are more films than just the 35 TATORT premieres. Maybe ten times more? A hundred times? No idea. Anyway, we can assume that there are still many composers who don’t have a profile at Crew United (as well as screenwriters, of course) because they are found in different ways. And we can also assume that composers are probably working on different film projects at the same time. This was confirmed by two female composers whom I asked about this. In any case, it is feasible if there is a longer lead time for the projects, and especially if you work in a team. For financial reasons alone, there may be a need to work on film scores  at the same time. 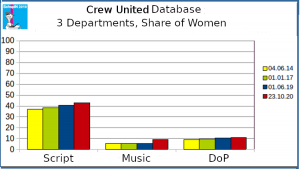 You can study film music composition as a postgraduate course after a regular music degree and the female graduates may account for roughly 10-30% of all graduates. However: there are lots of other roads to becoming a film score composer, but not necessarily to getting hired. So there is a need for action in the commissioners’  offices, production companies and directors, and whoever else decides on hiring someone for the musical score of a film.

To make sure that TATORT-music does not remain so male-biased, a look at the websites of Music Women Germany (22 female composers in the database) Track15 (a collective of 11 female composers) or the platform for representatives of electronic music female:pressure may help. 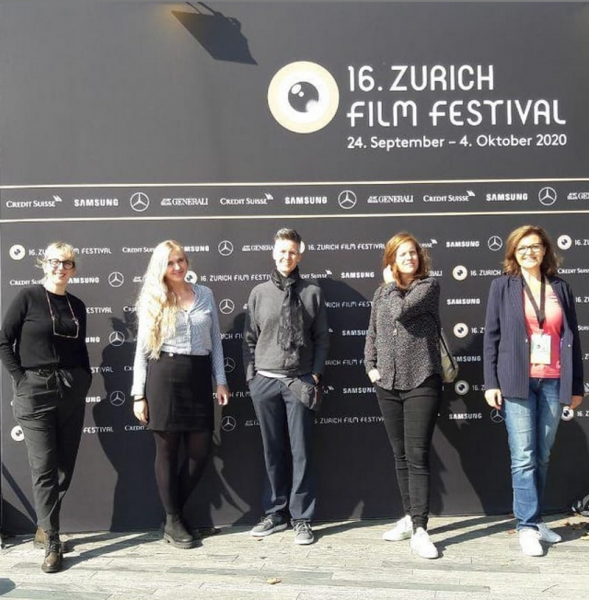