I’m getting so tired of it.

Why are feature films and television drama still so often produced without women, why does a menmenmen series get several million €€€ from public film funding, in addition to the million €€€ of a public broadcaster? Why don’t those in charge at the participating broadcasters make more women behind the camera and gender-dramaturgical counselling mandatory?

The TV series BABYLON BERLIN is hailed as “the most exciting and most innovative series from Germany ever” (Christine Strobl 2018) and as “an important part of the series offensive in the ARD media library” (Florian Hager 2020), by decision-makers in the industry who should be aware of Germany’s constitution. Shouldn’t equality also entitle everyone to equal access to film and television work?

On 15.11.18 I published a text about the German crime series BABYLON BERLIN, in which I pointed out the impressive production CLASH OF FUTURES as a much better alternative (Two German Series: BABYLON BERLIN and CLASH OF THE FUTURES). At that time I also wrote that I didn‘t really care for BABYLON BERLIN, a sentiment I had right from the start: the original novel‘s Charlotte, a law student and stenotopist for the police, became the series‘ Charlotte, part-time prostitute and police employee. And this feeling, this dislike stuck with me throughout all the episodes – an inglorious low point was the (approx. ten-minute?) sequence in which Charlotte Ritter and DC Rath ended up in the water with their car and sank, and she wanted to sacrifice herself and drown so that he could go on living.

By the way: Similar patterns can be found in the British series SHERLOCK: in the first episode of the second season – A SCANDAL IN BELGRAVIA (2012) – scriptwriter Steven Moffat turned Irene Adler, a former US opera singer in the original Arthur Conan Doyle‘s A SCANDAL IN BOHEMIA into a dominatrix. This modern-day Irene Adler falls for Sherlock Holmes, changes the previously presumably secure password of her smartphone (which is her life insurance) into a mega-stupid pun on Holmes’s first name, which he of course cracks ingeniously as he is (who makes this up? scriptwriter Steven Moffat), after he had also cracked her password for the physical safe ingeniously as he is – she had used her bust-waist-hip body measurements as the password (who makes this up? Scriptwriter Steven Moffat). And in the end, Adler is rescued by Holmes just as she is – for no apparent reason – in Pakistan and to be beheaded by terrorists. Again, there is no comparable plot in the original story.

“While Conan Doyle’s original is hardly an example of gender evolution, one has to worry when a woman comes off worse in 2012 than she did in 1891,” writes Jane Clare Jones in her worth-reading commentary in the Guardian, in which she also discusses the DOCTOR WHO series, for which Steven Moffat has written extensively. (Is Sherlock sexist? Steven Moffat’s wanton women. The Guardian 3.1.12.)

And yes, the motif of the woman who wants to save the hero by giving herself up also occurs in SHERLOCK: Here it‘s Watson‘s wife Mary who throws herself in front of Holmes just as someone shoots at him, and she dies (episode THE SIX THATCHERS). Doesn’t occur in the original Holmes stories either.

I haven’t watched the third season, but this is what it was about according to German Wikipedia: “In the third season, detective superintendent Rath and his colleagues are confronted with a series of murders during the filming of a revue film at the Babelsberg film studios. The first leading actress Betty Winter is killed by a falling spotlight during the filming and two of her successors are also later murdered in the studio.” I see.

The following illustration shows the many men and one woman (editor Antje Zynga) at the helm of nine departments in the three seasons broadcast so far (they are currently filming the fourth season, which was fixed before filming of the third began). As always, the men in pink, the women in light blue: 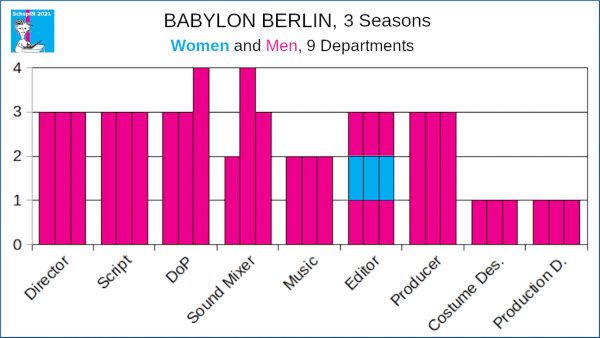 How come no one ever noticed that? Or did it just not bother anyone because the series is being sold in so many countries? Oh, and what‘s so innovative about it?

In my last blog text Rosy Times for Men in NDR Prime-Time Cop Dramas – the reprint of an article or a study for the newsletter of the Lower Saxony Film and Media Office on NDR crime series – I pointed out how many men’s productions there were among them, and especially how many setups and scripts were written by men. To compare, also expanded to nine departments, here you can see the statistics for DIE TOTEN VON MARNOW and DAS GEHEIMNIS DES TOTENWALDES (not a pretty sight either): 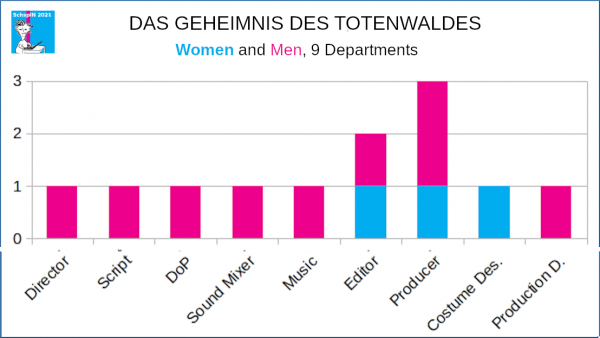 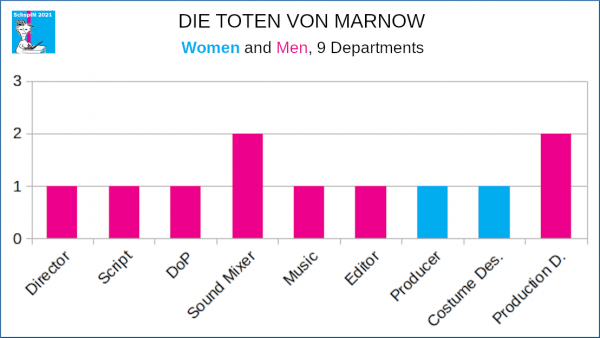 And Who‘s Paying the Bill?

According to the data base crew united, the first three seasons of BABYLON BERLIN received a total of €13.92 million in public funding, the fourth season €6.9 million. The funding came from the Film- und Medienstiftung NRW, the German Motion Picture Fund, Medienboard Berlin Brandenburg and Creative Europe Media.

I‘ve not been able to find out how much money public broadcaster ARD paid. But I‘m sure it was a lot. Helena Ceredov wrote on kino.de (9.12.20): “With a budget of almost 40 million euros, BABYLON BERLIN became the most expensive German series ever.”

Ms. Strobl, now ARD programme director, recently argued for more “internationally competitive series projects” like BABYLON BERLIN. “I believe that we need these kinds of programmes on a regular basis. […] I think we need one or two formats of this scale per year.” (cinearte No. 518, 28.6.21)

Now I don’t know what Ms Strobl meant by “these kinds of programmes”. Things that come to mind when I hear BABYLON BERLIN are the very high budgets, an overwhelming male bias behind and also in front of the camera, the male gaze as the narrative principle, and a story and realisation that I didn’t like. Leading actor Volker Bruch‘s involvement in the unbearable #allesdichtmachen campaign (against the German governments anti Covid19 measures) doesn’t make me like the series much either, but that’s a topic for another day.

And one more question for Ms. Strobl: Will the next “formats of this magnitude” be written, directed, photographed etc. etc. by women to counterbalance BABYLON BERLIN, or will it just be the same procedure as every year?

Today‘s text began with “I’m getting so tired of it”, and so will the last chapter:

Where is the positive, please?

I’m getting so tired of writing about bad, male gaze-narrated and filmed drama. That’s why I’d like to recommend a special kind of series:

There is this great crime series from Belgium, it‘s still available in the arte media library until 1.7.22. It focuses on four sisters, Eva, Veerle, Bibi and Becka, who want to free the fifth, Goele, from her horrible husband Jean-Claude, and two brothers, Mathias and Thomas, owners of an insurance agency. The story is told in ten dramaturgically interlaced episodes: The first episode takes place on 31 October, the flashback in the first episode begins New Year’s Eve, 10 months earlier. The tenth and last episode begins on 11. November, the flashback takes place two weeks earlier, on 28 October.

The series is based on an idea by Malin-Sarah Gozin, who co-wrote the scripts with Bert Van Dael, directed by Nathalie Basteyns and Kaat Beels. There are very many female roles of all ages, but none is a prostitute. There are real and bizarre (and very diverse!) characters, women as well as men. There is murder, attempted murder, collateral damage, deceit, harassment, oppression and slander, there are motives and dead ends, subtle humour, black humour, deeply sad moments and real sibling relationships. The series is called CLAN. It was produced in 2012 and is also available in the original Flemish version on the arte media library. CLAN must have cost only a fraction of BABYLON BERLIN, but it is much better. Enjoy!

And here is the 9-departments-check for CLAN: 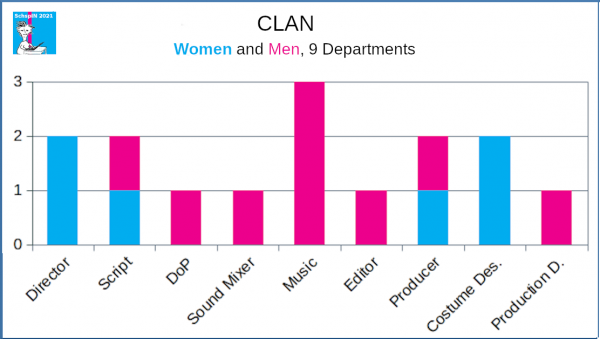