From July 1 to 10, 2021, this year’s Munich Film Festival took place, for real, in an open-air edition. Four awards were announced in advance, Senta Berger and Robin Wright received the CineMerit Award, Franka Potente the Margot Hielscher Award and Małgorzata Szumowska was the centre of the Homage, so to speak (The Cineastic Foursome).

An acquaintance suggested that I should take a look at the New German Cinema and New German Television sections, especially with regard to female screenwriters – so here goes!

All films in the New German Cinema section were invited by a selection committee, on the other hand, broadcasters can put forward films for the New German TV Movies section. What both groups have in common is that the films must be premieres, at least German premieres, ideally European or world premieres.

This means that the cinema films are predominantly early films, i.e. first, second or third films of the respective directors or producers – because those who are already established would probably prefer to show their film in Berlin, Tokyo, Toronto or Cannes. The situation is different for television films, where the festival merely has to take place before the first broadcast.

The following first figure shows the women and men as script writers or directors for the twelve films in the New German Cinema series – with a majority of women in both departments: 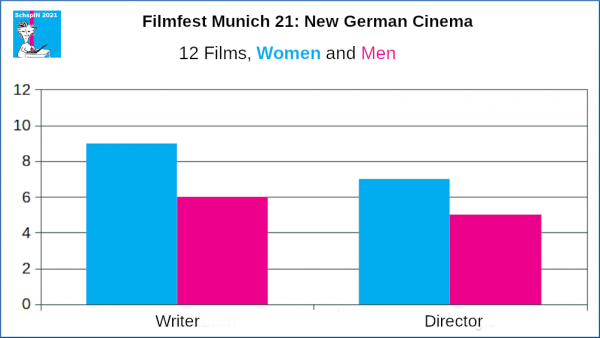 The second figure shows the women and men responsible for scripts and directing for the thirteen films in the New German TV Movies section; here the men are in the majority in both departments.. 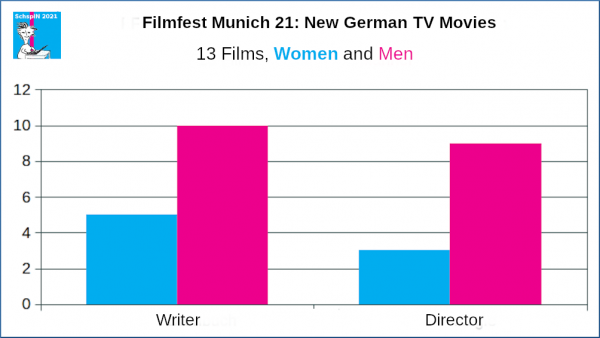 The third figure gives a more detailed breakdown of authorship for the cinema and television sections. Were the scripts written individually or in teams, and if the latter, who was in them? The majority of the scripts were written by individuals – which is not really a surprise: 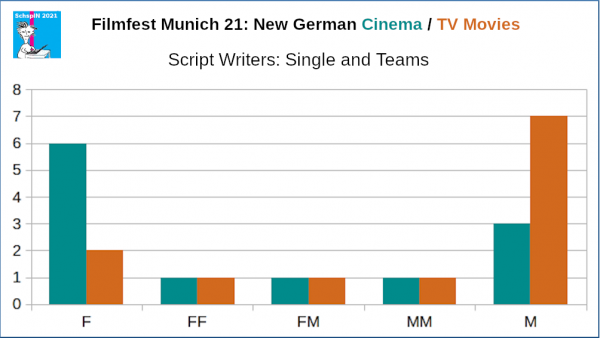 So we were able to establish that there are very different conditions in the two sections. In the case of the New German Cinema, the proportion of women is higher, well over 50%, both in scriptwriting and in directing, and in the case of the New German TV Movies, the proportion of men is well over 50% in both departments. I already mentioned that the selected cinema films are ‘early films’ of the directors in their respective careers. However, this does not apply to the television films, where there are a number of older and more established film people both as authors and directors. It is also interesting to note that of all the cinema films, there was only one director who was not involved in writing the script, writing it alone or in a team (LIEBER THOMAS). Among the television productions, there is only one film (GELIEFERT) which was written and directed by the same person.

Let‘s not forget, there are only 25 films in all, which is not good representativeness (should this term exists, – if not: Tadaa! I have just invented it).

And in front of the camera

In my last text – or the last two? – I only looked at team positions offscreen and not at the distribution of roles, which has been requested by various readers. Therefore, here‘s an analysis of the first roles and the main casts (as they are given on the FFM website entries for the films). 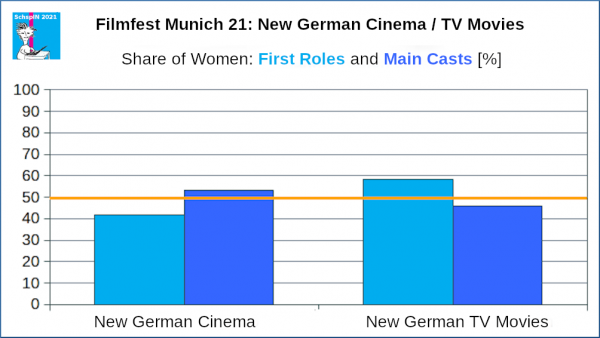 Interesting: in the cinema films, there are more men at the centre of the story (= male first roles), in television more women. I know too little about the television films and also about the other television films that may have been submitted to be able to interpret this meaningfully.

For the main casts, the most important roles, it is the other way round for the two sections; in the cinema films the proportion of women’s roles is over 50 %, in television it is under 50 %. The former could be related to the high proportion of women among the authors, and the latter to the phenomenon of “now we have a female lead, that’s enough” – and could possibly change through the use of NEROPA. But that is a topic for another day.

The last figure shows the age ranges for the female and male first roles, or rather the actors and actresses cast, for both film series. 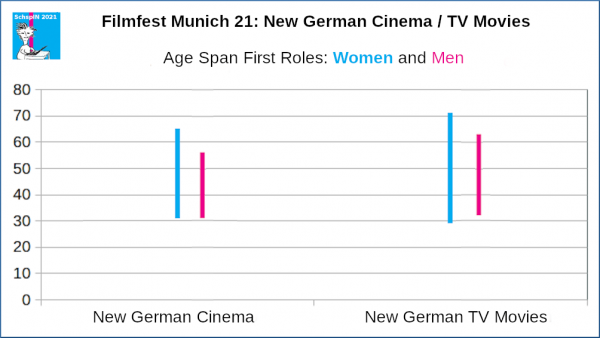 In New German Cinema, there were no first-role actors over 60, though there were two actresses: Corinna Harfouch (62) and Ulrike Willenbacher (65), the oldest actor was Christoph Kaiser (56). In television there was one actress over 70 (Maren Kroymann), the oldest actor is Joachim Król (63).

Roles in cinema being younger overall than on television is something I had already established many years ago, at least for the first roles (Age: A Picture is worth a Thousand Words). But again: there really aren’t many films in these FFM series, so we should be careful about drawing any authoritative conclusions.

What might be interesting, though, is a comparison of the New German Cinema and New German TV Movies at the Munich Film Festival over the last 20 years. But that’s a task for another day.