Last week, a colleague from Cologne drew my attention to this year’s nominations for the German Television Prize, which will be awarded tomorrow, September 16, in Cologne. In response, I looked at the nominated fictional productions and television creators through light blue and pink coloured glasses and made an analysis.

There are four categories for films and series in this award: Best Television Film, Best Multi-part Features, Best Drama Series and Best Comedy Series, for each of which three productions were nominated. In addition, there are the individual awards for Directing, Screenplay, Cinematography, Editing and Music, with three productions nominated in each category. For the set design nominations, production design, costume design and, for two of three productions, make-up design were combined. In addition, there are the awards for Best Actress and Best Actor with five nominees each, partly for two productions.

A total of 22 productions appear in all fictional television awards, 7 television films and 15 serial formats. Once again, many crime dramas, but interestingly no TATORTs (“crime scene“, Germany‘s top cop drama)

The first figure shows the proportion of women and men for the six departments directing, screenwriting, cinematography, sound, editing and music (6-divisions-check). Yes, there is no television award for sound, I wonder why (cue sound and vision), but since the sound engineers are usually in my 6-divisions-checks, I’m also including them here: 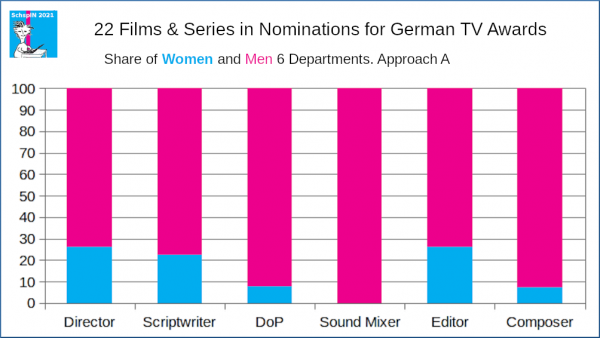 The biggest discrepancy is in editing: the proportion of women editors does not even reach 28 %, in contrast to 51 % among graduates of editing at film schools. This 28 % is also astonishing because female editors are probably more likely to be employed in television productions than in cinema films. For example, the proportion of female editors in the 365 first broadcast TATORTEN 2012-18 was 63.8 %, whereas in the top 100 cinema films in the same period it was only 31.7 %.

As far as screenwriters are concerned, their evaluation was somewhat difficult. For a season with six to eight episodes, there are sometimes more than one or two writers common in television films. The keyword here is the Writers’ Room. I’ll go into this again below.

The next figure shows the 6-divisions-check with a different calculation, but the results are not fundamentally different. Average female share 15.9 %, average male share 84.1 %. 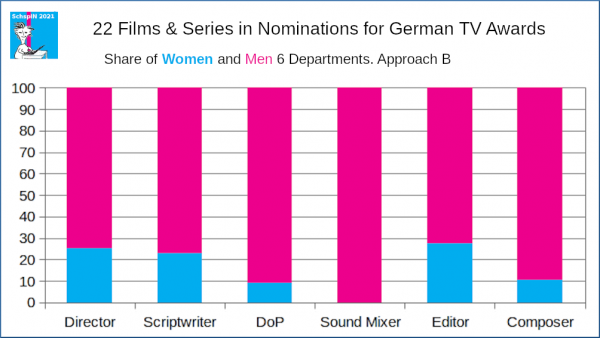 The Difference between the Two Approaches

Approach A: I add up separately all the women and men in a trade in all 22 productions and calculate (rule of three!) the respective proportions. Example: Direction: 7 women, 20 men. Women’s share 25.9 %, men’s shares 74.1 %.

I’ve already discussed this under Method and justified why I usually work with Variant A with this small deviation, This mode is also less elaborate and error-prone.

Researching databases and other sources can be difficult, especially when searching for screenwriters. Different numbers of authors may be listed for a production depending on where you look. For the German Film Awards, three authors are nominated. Leo Khasin (TV film DAS UNWORT) and Stefan Kolditz for the multi-part feature DAS GEHEIMNIS DES TOTENWALDES. Both authors are the only ones listed on filmportal, IMDB, crew united and wikipedia.

The third figure shows the male and female sahres for the six departments with awards. For directing, three women (for two productions) and one man are nominated, for screenplay and camera two men and one woman each. These shares of women are significantly higher than the averages in the three departments for all productions in the nomination pool. What‘s this telling us? That the women’s performances were “above average” – there were fewer nominees, but those who were nominated gave particularly good performances? Or was it simply the decision to almost always nominate at least one woman, no matter how few there were in total (this does not apply to music)? Or yet something else?

Yes, the percentage of nominated female editors is indeed so low. Three series were nominated with a total of 8  editors, 7 of them men, which results in 11.1% women. – I specifically chose option B, which results in a slightly higher figures for women, so not to appear biased. – And thanks to directing and the “women’s departments” of production design, costume and make-up, combined as set design, the proportion of nominated women is 34.3 % and that of nominated men 65.8 %. For the five departments without set design, the figures would be 28.9 % and 71.1 % respectively.

The figures may slightly differ if the non-fictional formats are included, or when production desing, costume and make-up are evaluated individually. I didn‘t do this though, because I am only looking at awards for fictional programmes, and the award is given for set design. So the female share stays at 34.3 %.

By the way: The winners in these so-called “personal categories” have already been announced, you can find them on the website of the German Television Award.

I’m not the biggest fan of awards, especially when it comes to television and streaming services. By that I mean that awards are all well and good and career-enhancing and a distinction, but what do awards do for individual women when the vast majority of productions continue to be determined, conceived, written, directed, photographed, recorded, composed and edited by men?

The Venice International Film Festival that just took place showed something similar: 5 out of 21 films in the competition had a woman director, and if I counted correctly there are 9 films where women (co-)wrote the scripts. Of course it is positive that female filmmakers have received the important prizes and thus reach a larger public, including the media. But that doesn’t change the fact that the majority of stories we are offered in the cinema are still written and performed by men.

And the Best Productions?

Finally, let‘s look at the twelve nominations for the Best Production categories. Here again the focus is on the six departments directing, screenplay, camera, sound, music and editing. There is no production with a female participation in four or more department, which unfortunately is quite unsurprising. On the other hand, eight out of twelve productions have five or six (of six) all-male departments.

This is particularly extreme in the category Best Multi-Part Feature. Two of the nominated productions – DIE TOTEN VON MARNOW and OKTOBERFEST 1900 – have all men line-ups in the six departments, while the third – DAS GEHEIMNIS DES TOTENWALDES – has a mixed pair – Julia Karg and Kai Minierski responsible for the editing. That‘s all.

EDIT: For illustration purposes, on Sept. 17, I added a graphic depicting these nominated “Best Men’s Multi-Part-Features”, all of them produced for public broadcasters: 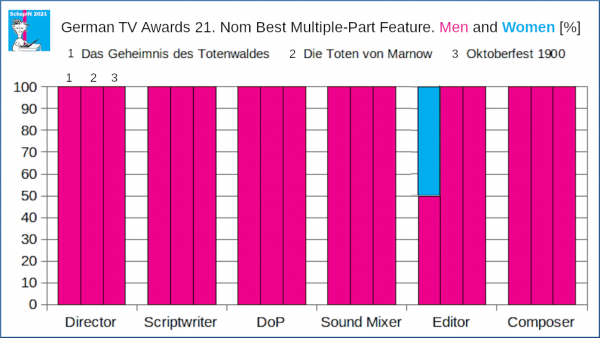 Is this something that might be discussed at jury meetings, where the nominees are drawn from the shortlist and the final prizes are awarded? Are there any jury members who find all-male productions outdated? Will this be addressed at the awards ceremony tomorrow? The 14 jury members are presented on the TV Awards website, seven men and seven women. I don‘t know if all 14 decide everything together, or whether there are, for example, separate sub-juries for fictional and non-fictional awards. By way of explanation, it simply states:

By a majority vote, the jury determines what they consider to be the best and most successful productions and individual performances of the previous year, in order to honour them with the German Television Award on the same evening. (Source)

I find it unfortunate that in addition to “the best“, “the most successful” is also mentioned as a criterion, because this usually boils down to the questionable ratings. But that’s a topic for another day (or an old text: For Heaven’s Sake, Look at the Ratings!).

The next figure now shows the 12 productions in terms of the number of departments with women’s participation (again: it is enough, for example, if there is one woman among 6 authors, it counts): 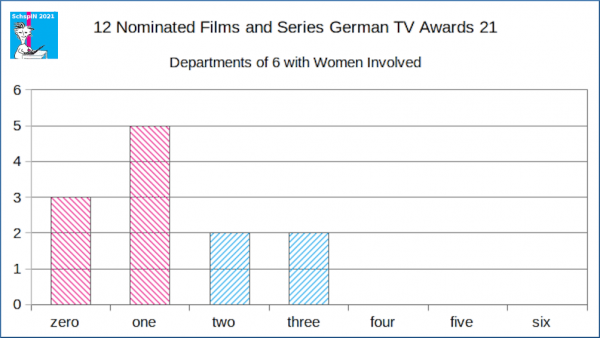 The productions with no or only one department with women responsible or involved are shaded pink (too male-heavy), all others, i.e. from 2 out of 6, are light blue. The background to this is #2v6pN, my straightforward proposal to reduce gender disparity in the film and television industry. 2v6 two out of six could be enforced as a condition for public film funding or public contracts. If no woman filmmaker participates in at least two of the six departments mentioned, no funding, no commission would be given. Quite a simple story. (The model is actually called: #2v6pN – two out of six plus NEROPA, but this is supposed to be about team positions only). It is two departments out of six, not three, as this – one third – is the average proportion of women at film schools for the six departments. Those who only want to work with men or only give them the central tasks could do that, but not with public money. This would affect, for example, arthouse films such as those by Christian Petzold just as much as the three multi-part features mentioned above or the TV series BABYLON BERLIN.

If the public broadcasters were to work with the #2v6 model, not only four but a total of eight of the twelve productions would have at least two trades with women’s participation. Does that make a difference, except for the statistics? Yes, I think it can lead to better and truly innovative films and series if not only half of the filmmakers – namely men – can potentially be creative and not only the male gaze is the measure of things (see also my research for the Film and Media Office of Lower Saxony on NDR crime formats Rosy times for men in NDR Prime-Time Cop Dramas).

Tomorrow is the official presentation of the television awards. We can be curious to see if the continuing discrimination of women behind the German television cameras will be addressed, or if it will just be celebrated à la “We have so many nominated women, and some even get awards!”.