To start the year, I would like to present a film festival analysis. It deals with the proportions of women in directing, scripts and cinematography – the so-called 3-departments-check – in the main competitions of twelve German film festivals.

I briefly considered evaluating music / composers. But since music, similar to sound, is listed very incompletely (both on film websites and in databases) the research would have been very time-consuming and just beyond the scope of my capacities.

The first table shows the festivals and the number of films in their main competition in the three years examined. The majority were feature films, you’ll find the number of documentaries in brackets: 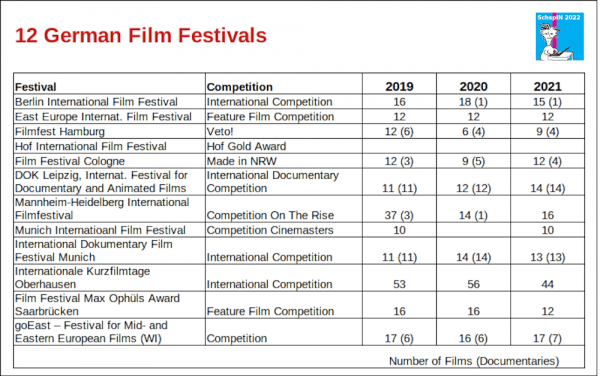 Most festivals provide programme notes or film lists on their websites, often in the digital archive, from which at least the film title and often also the director can be seen. More detailed information is often available, including synopses and a short biography of the director, as well as other team positions. In some cases, friendly and helpful staff members have sent me lists or links. (All enquiries were answered promptly!).

I was able to complete the information on the three trades mostly via the IMDB database, the question about the gender of the filmmakers came partly from the short biographies on the festival pages (director), supplemented from IMDB (author and DoP), and some film websites, interviews or through further online research.

Out of a total of 401 competition entries, I only failed to identify a position twice, both times it was the DoP. That is 0.5 % of all (401 x 3) positions. (These are only the feature-length films, i.e. not counting the Oberhausen Short Film Festival, where 153 films were shown in the competitions).

For some documentaries, I could only determine the director and DoP, no matter how thoroughly I searched. In these cases, I took the director’s entries for the script as well.

A gap in the table can be found at the Hof Film Festival. They don’t have a competition in the conventional sense, but: “It has to be the first feature-length film (feature film) by a filmmaker. In accordance with this criterion, the Hof Film Festival sifts through all the films submitted (…)” (information from Sabine Reiter, Bavarian Academy of Fine Arts). Unfortunately, the corresponding lists are not available through the festival office, nor can they be found on the website. I have been promised that I will still receive the information and will then complete this evaluation.

Another gap is due to the fact that there was the Munich Film Festival did not take place in 2020. Other festivals were held online and had smaller competition compared to pre-pandemic years.

Due to the mass of an average of 51 films in competition at the Oberhausen Short Film Festival and the special short film situation, I had to make the decision to only evaluate the position of director from this festival. For some films, screenplay and camera were also available; for example, in 2019, for 26 of the 53 competition films the festival website provided information on scirpt, and 24 films on camera. That’s less than 50% for both. For most films – including those of other years – these items are missing, and they are also not listed on IMDB and other online sources. In the case of short films, the script is often written by the director, who often also films the short, though if this is not explicitly stated anywhere I can’t take it for granted. And I cannot contact 153 filmmakers on these issues.

My initial assumption was that the proportion of women directors and screenwriters is highest in competitions with first to third feature films (Saarbrücken, Hof), documentaries (Leipzig, Munich Doku) and short films (Oberhausen). And that the proportion of women cinematographers is higher in documentaries and short films than in long feature films.

I also wanted to check whether the assumption that in cinema the directors always write the scripts as well is true. And thus the tag “a film by” is even more true here than in television, where there are significantly more independent, non-directing authors.

In the diagrammes, I replaced the festival names with the respective cities, I added D (documentary film festival) and F (film festival) to the two Munich festivals and slightly abbreviated Mannheim-Heidelberg.

The following tables show how many of the competition films had no women at all in directing, screenwriting and cinematography, or how many had only women in all three sections. Values above 50 % are highlighted in each case.

You can see that 2019 was the year with the fewest competitions with films involving women in the three departments. However, this does not apply to all festivals, see Berlin for example.

In general, there is a focus on female directors at festivals within the industry and the media, but I cannot say whether this applies to all festivals and wherer it is also a topic within the festival organisation, whether there are even considerations about voluntary commitments or the like. In this respect, my evaluation may be about something that is perhaps not a topic or goal at the festival itself: gender equality. Nor do I know how many films applied to the festivals in each case and what their composition was in the three departments. It is not possible to speculate on whether films by women (= director and screenplay) are favoured or disadvantaged or treated equally in the application process.

In 2021, there were still three festivals where half the films had only men in the the three departments; For Munich Film Festival, this was the case with eight out of ten films. The second table has a lot of zeros, which means: no film in the competition with a female director, writer and cinematographer. Whereas even one participation, a collaboration with men at the head of the deaprtment, would have been enough to qualify. Documentaries in particular often have several DoP’s, and there are also teams in the screenplay section. Nevertheless, zeros en masse, the highest value of 25 %, i.e. every fourth film with women in all three departments, can be found at the goEast Festival of Central and Eastern European Films Wiesbaden 2020. In 2019 it was already 23.5 % (= second highest value), but in 2021 only 5.9 %. Let’s wait and see what it looks like this year. 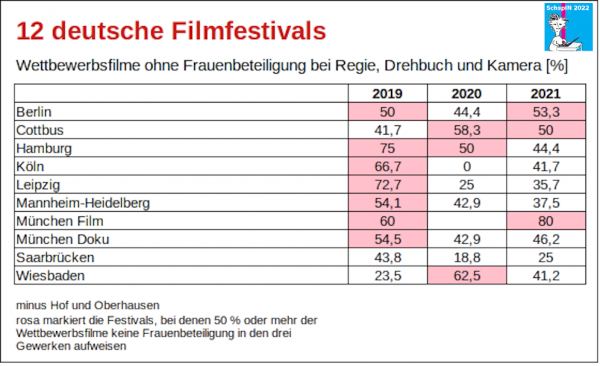 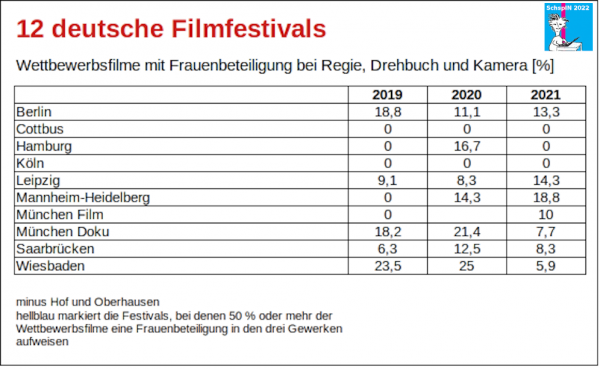 As I said, there are twelve festivals, three departments and three years each. This is difficult to represent in one figure, so it is divided into nine diagrammes. Each year separately, the three trades separately, and the festivals arranged according to the number of women. (To enlarge and browse, simply click on an image): 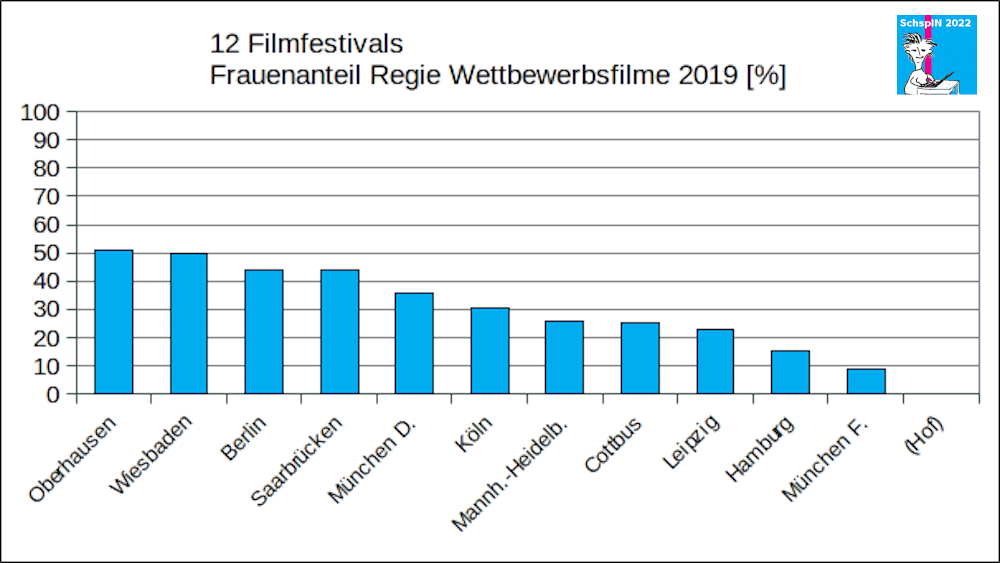 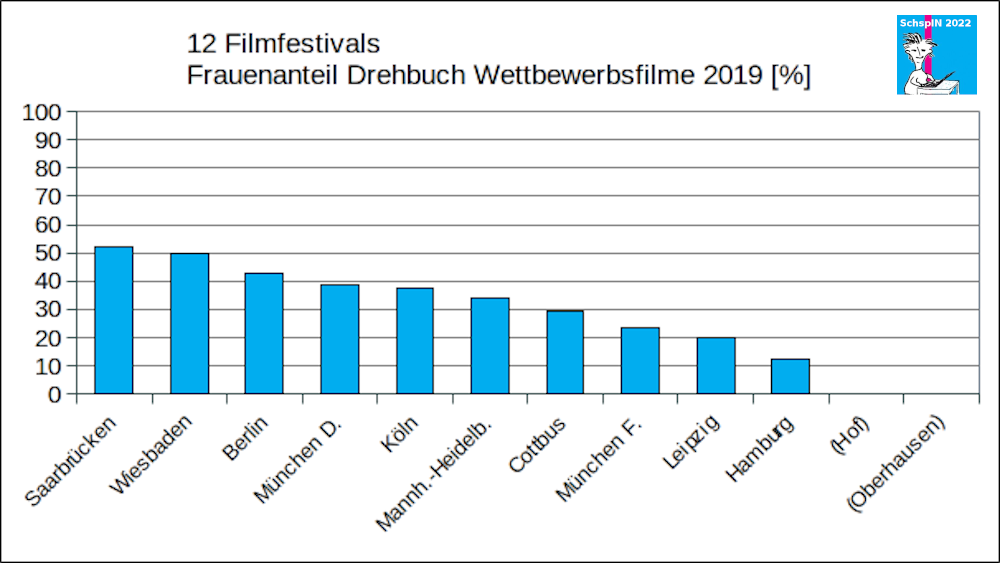 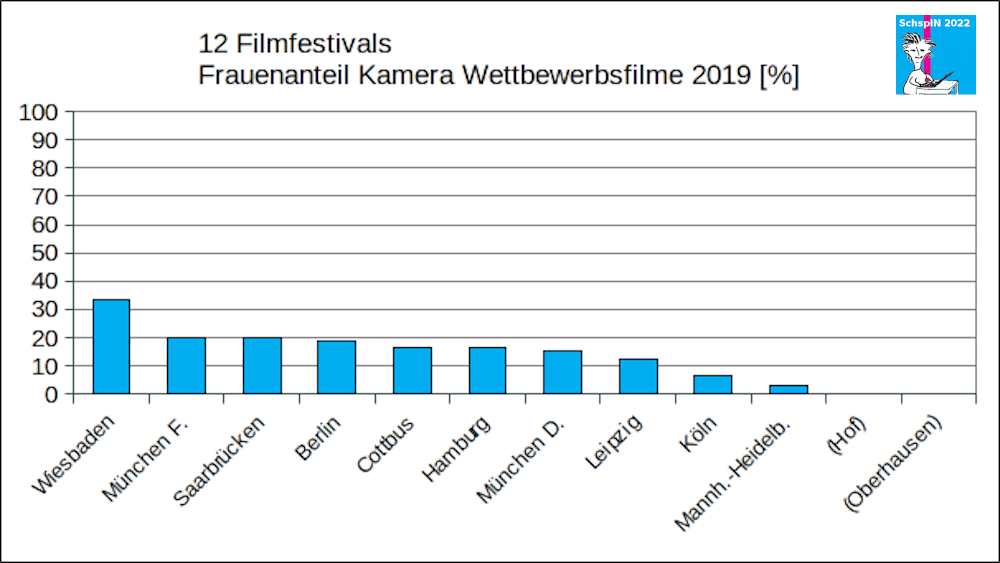 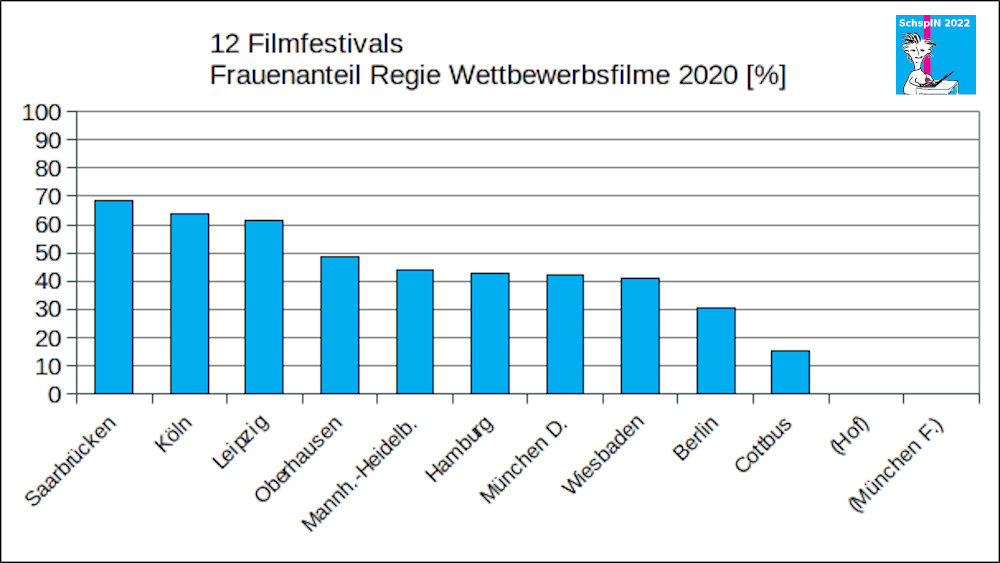 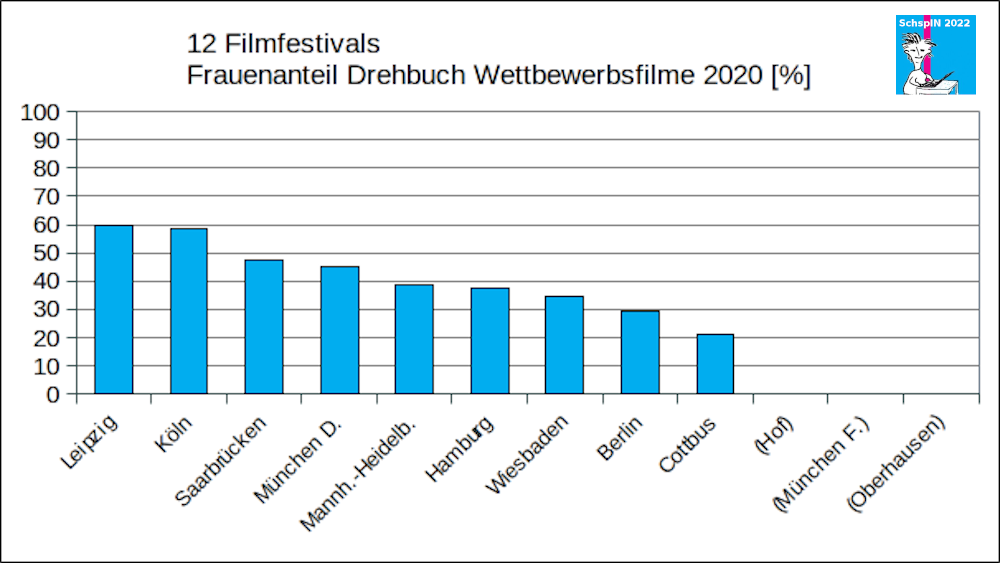 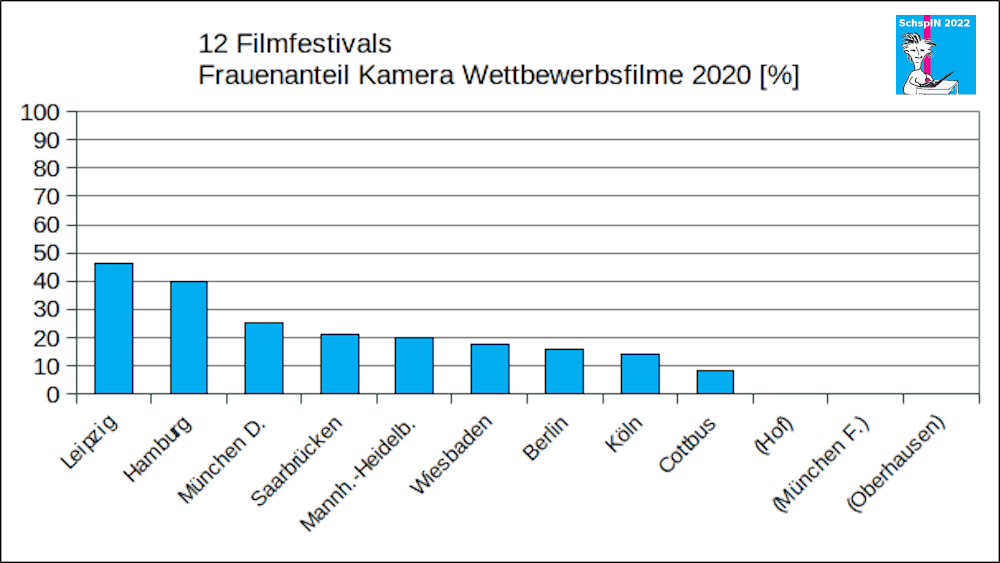 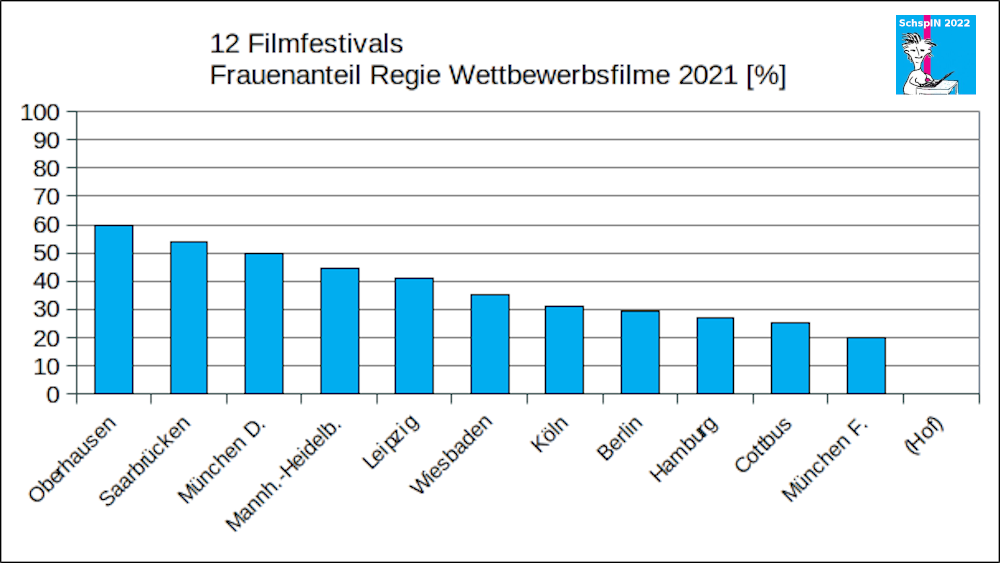 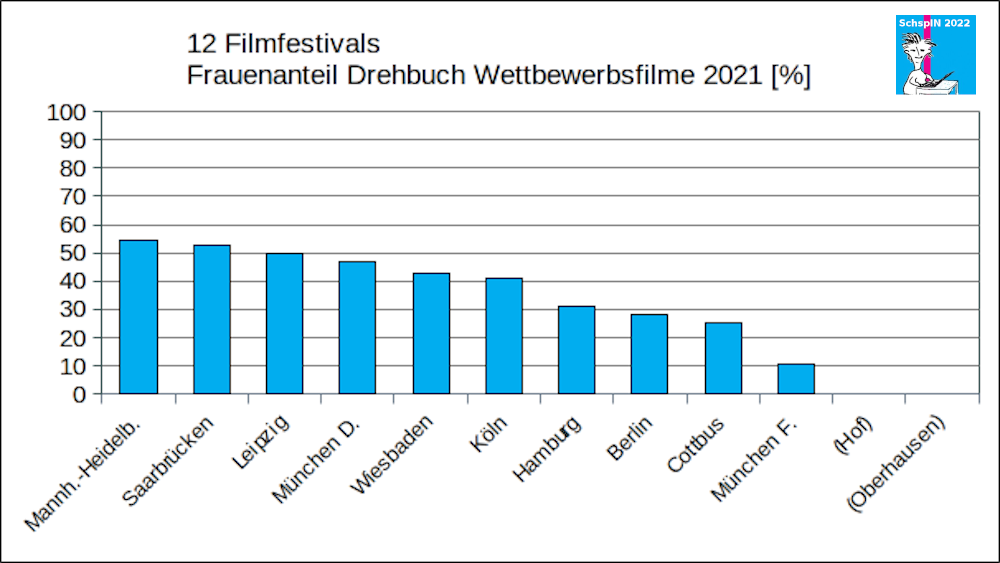 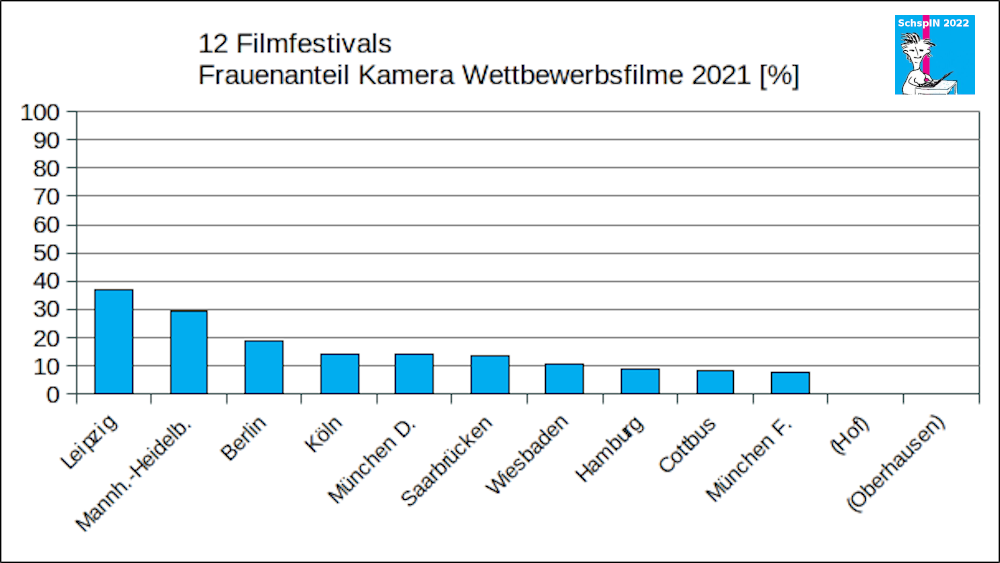 The same figures, only separated by festival, are shown in the next eleven charts (Hof is still missing), Cottbus and Munich Film Festival are competing for last place, and even Hamburg doesn’t do as well as I would like as someone from Hamburg. 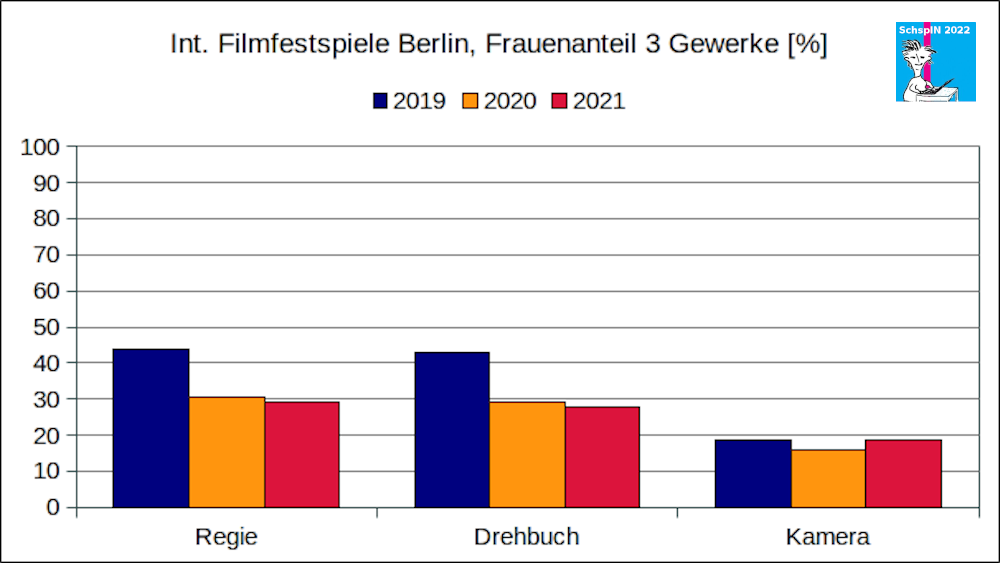 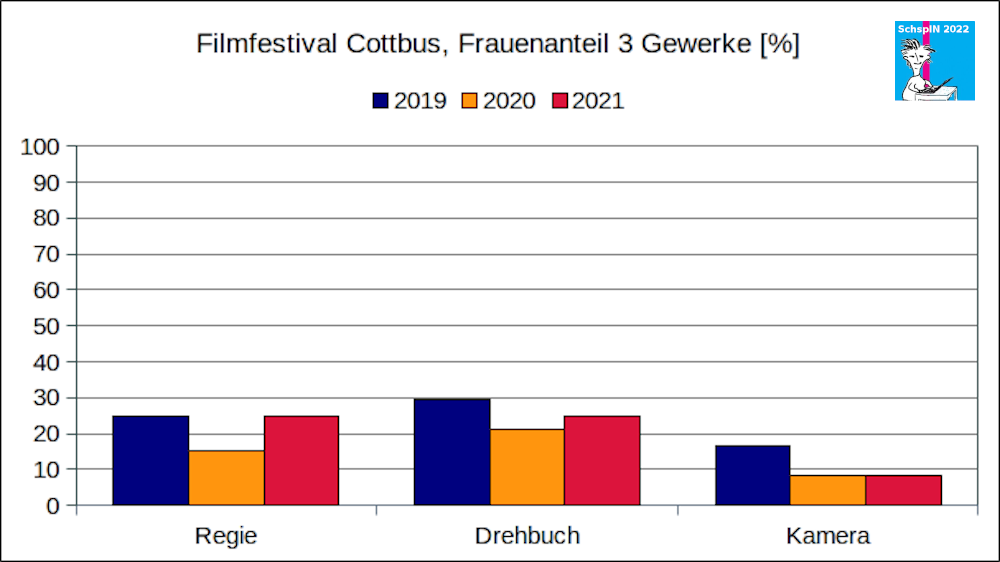 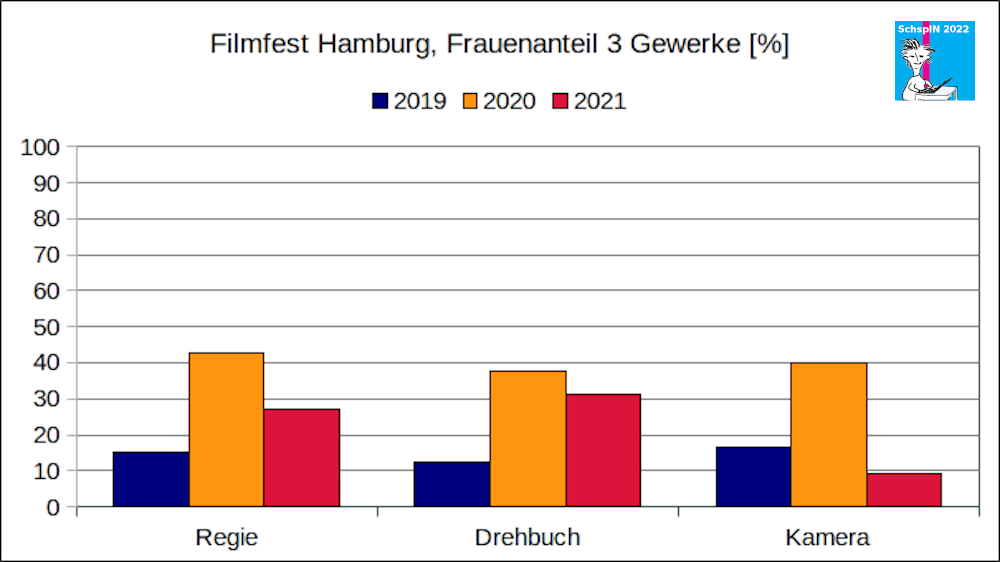 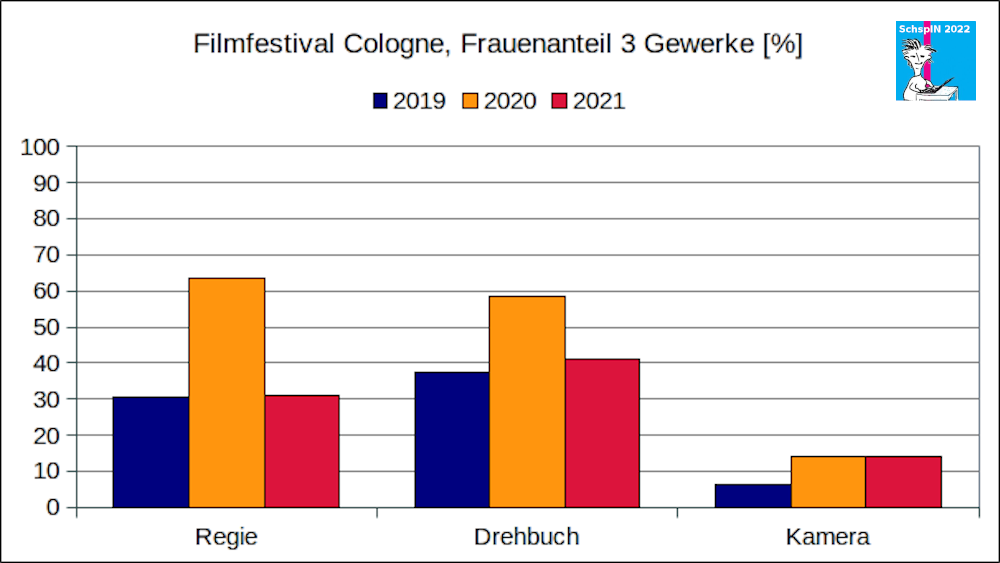 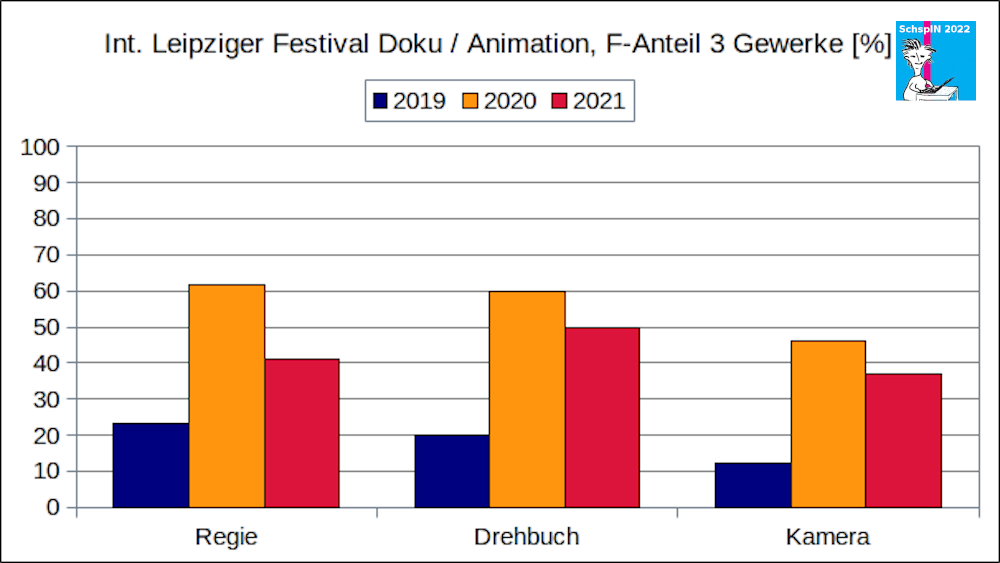 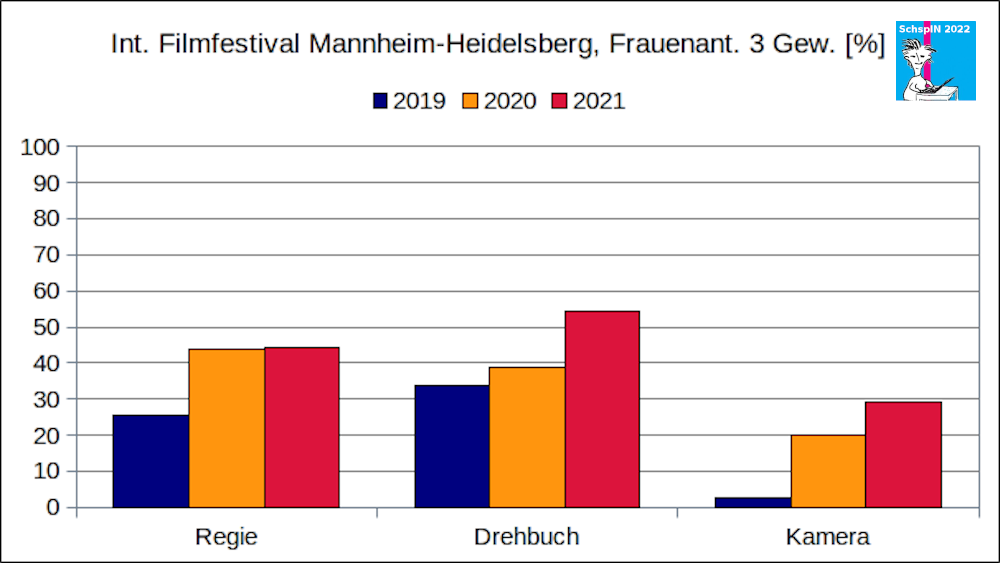 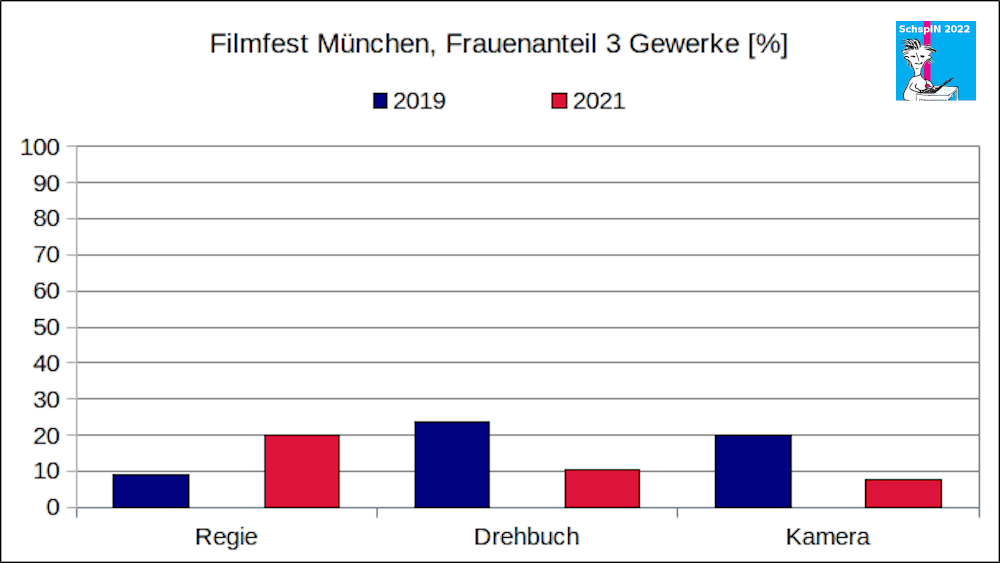 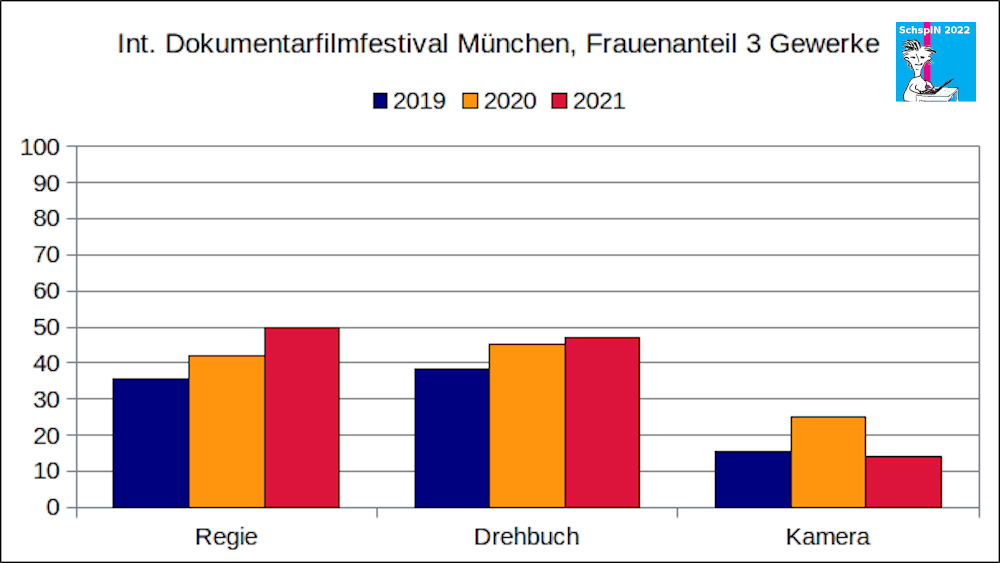 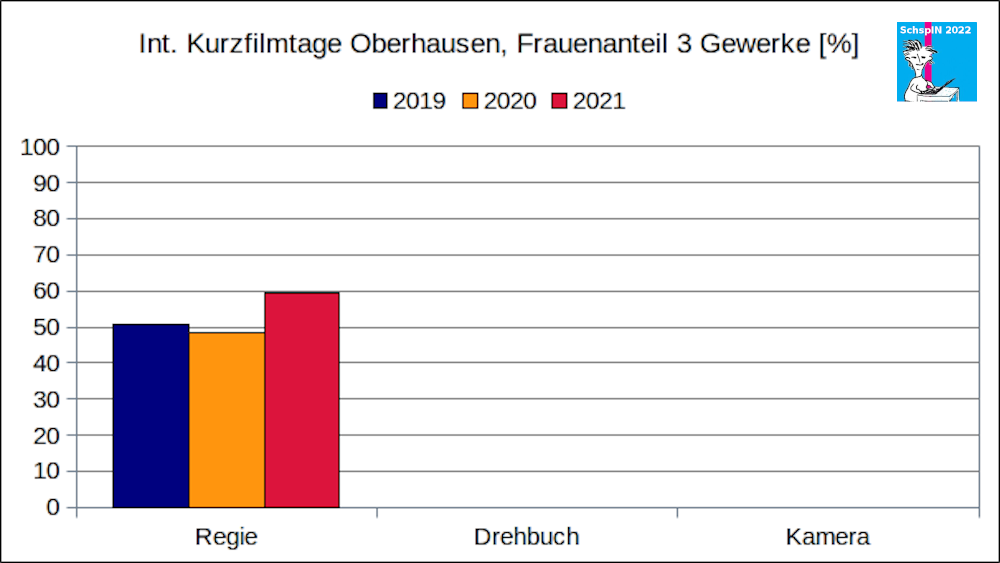 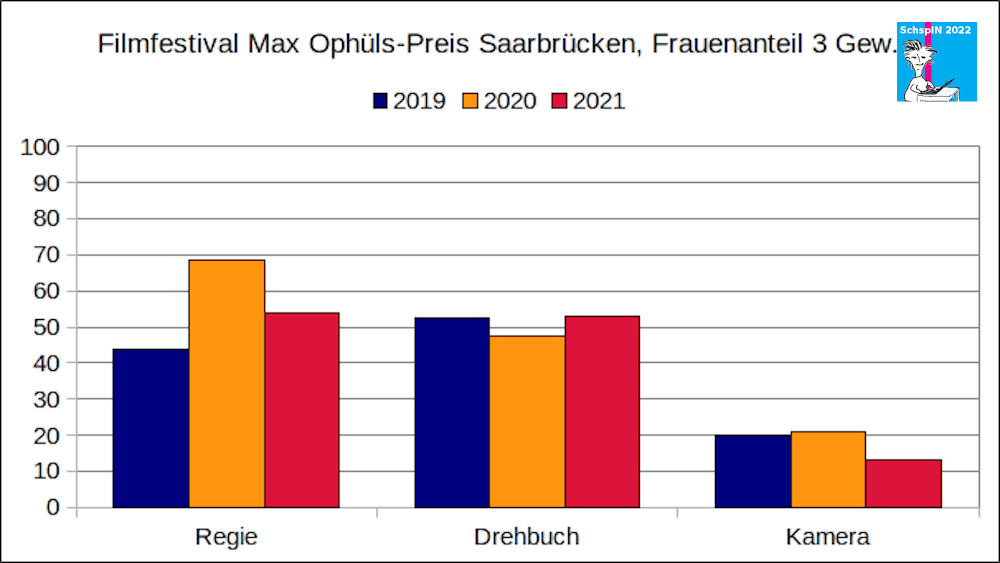 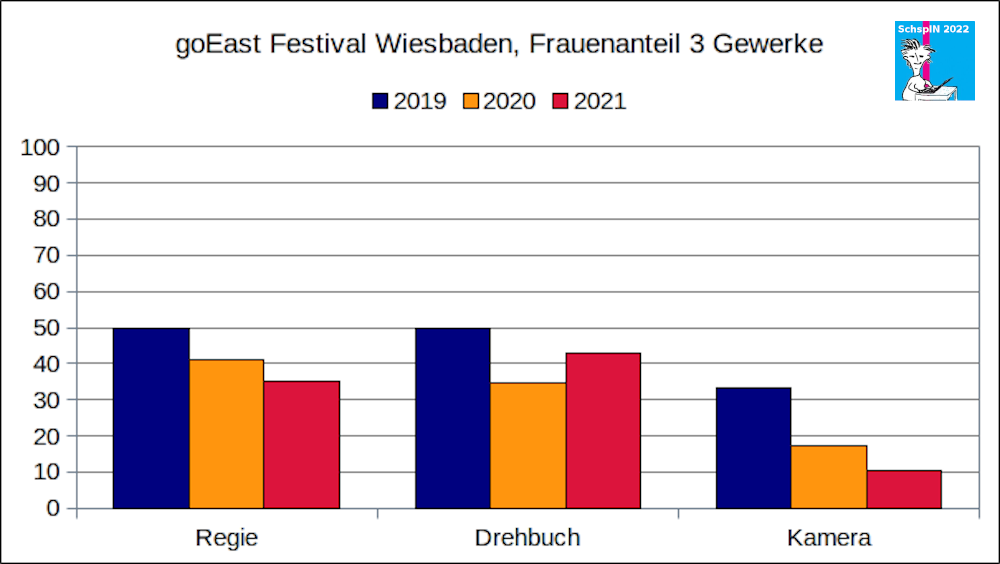 In the total of 554 films in all eleven competitions 2019-21 (Hof is still pending, as mentioned), 254 were directed by women and 365 by men. That’s a total of 619, significantly more than there were films, which is due to the fact that some films – not only documentaries – had directing teams.

Phrases like “films by women directors” are problematic as long as it is not clear what exactly is being talked about. Films by one female director? Several women directors? Films with mixed teams of women and men directors?

The average of all festival averages for the proportion of women directors is 37.7 %. But if I only count the films in which one or more female directors directed without a male director, then their share is 32.8 %. Or perhaps to put it in more understandable terms:

In the 11 German film festivals in total, just under a third (32.8 %) of the films screened in the main competitions from 2019 to 2021 were directed exclusively by women.

And finally, the answer to the question about auteur films: yes, it looks quite different from (German) television. In very few films (this is the first value in each series of three) the director is not involved in the script at all. The second value – usually the highest – shows the films in which the directors wrote the screenplay alone or as a directing duo. The third number shows the scripts written by the director in collaboration with other authors. 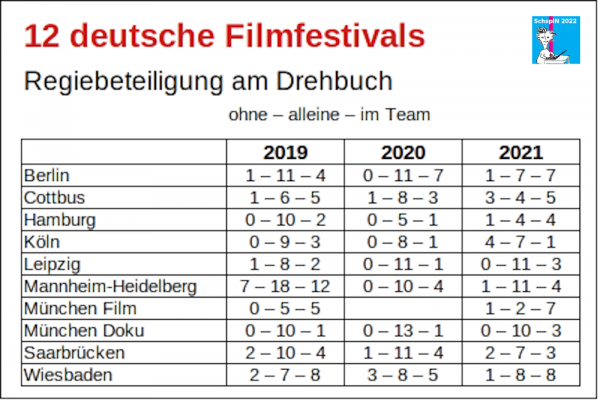 I hope to receive the titles of the films that qualified for the Hof Gold Award soon. Then I can add them to this analysis, and perhaps also evaluate the first-named cast members of the feature films.

I would like to express my sincere thanks to May Ho Ho, Berlin, for gender research assistance with some Chinese filmmakers, and to Aki Sato-Johnson, Toga / Japan, for clarifying a Japanese filmmaker.

Furthermore, many thanks to Angela Heuser, Dramaturg (VeDRA), who confirmed my approach in dealing with unstated script positions in documentaries.

Also many thanks to Dario Becker / Filmfest Hamburg, Sabine Niewalda / Kurzfilmtage Oberhausen and Anne Thomé / DOK.fest München for catalogues, film lists and notes on the competitions on the festival pages. Special thanks to Sebastian Hammer / Film Festival Cologne for film lists and links to all competition films of the three years.

My net working time on this study, including the German and English publication, was 63:47 hours.