The World Conference of Screenwriters 2022 (WCOS) is held in Copenhagen on 5 and 6 October 2022, organized by the Danske Dramatikere / Danish Writers Guild.

It is the 5th biennial conference for professional screenwriters from around the world, which was originally planned for 2020, but only possible now due to corona. About 300 participants from 37 countries, most of them organised in their respective screenwriting guilds, came to the Danish Concert Hall in Copenhagen (great archi tecture!) for lectures, interviews and above all panels on various current screenwriting topics, and to network with others during the breaks.

I was invited to participate in the panel A Room of One’s Own? What will it take for Female Voices to be heard?, along with writers Fiona Samuel (Aotearoa / New Zealand) and Jenny Lund Madsen (Denmark) – moderated by Gail Renard (Great Britain), who stepped in for Carolin Otto (Germany, President of the FSE / European Screenwriters’ Association, unfortunately unable to attend).

Among other things, I presented some results from the SERIENSTUDIE / SERIES REPORT 2022 in English, which I am publishing here. The study as a whole is so far only available in German (PDF, 36 pages).

Study on the participation of female writers in the creative areas of script writers, creators, showrunners and headwriters of publically funded and non-funded German series for streamers or VoD providers, private broadcasters and public television.

Quote as: Stieve, Serienstudie / Series Report 22
First published in German on the blog SchspIN – An Actress’s Thoughts on 16 May 22.

The different participation of women and men in front of and behind the camera in the German film and television industry has been a topic of discussion for some time. At first, the focus was on directing, while scriptwriters and related fields such as series creators were often only mentioned in passing and not yet examined in depth. Yet they are the ones who create the stories, the ones who should be on the label “a series by”. Consequently, an answer to the question of whether gender imbalance continues to exist in scriptwriting and how big it is is overdue.

In the first part of the analysis, the data pool from 202 seasons is characterised and processed for the different areas of investigation in the study period 2017 to 2021.

The second part looks at the scriptwriters, the authors of a series. Their proportions of women and men are analysed in subsets under various aspects. The average proportion of female writers is 30 %, but there are significantly lower and also higher values, depending on the group in question. The lowest proportions of women are found in the scripts for streamers’ productions.

The third part deals with the more senior, creative position of creators. Here, the proportion of women is between 5 and 20 %.

Contents of the Series Report 2022 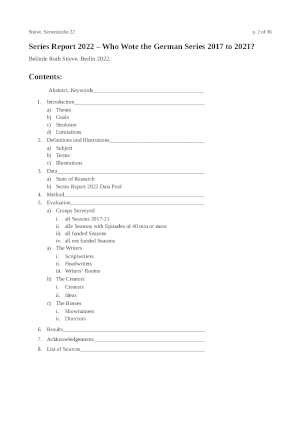 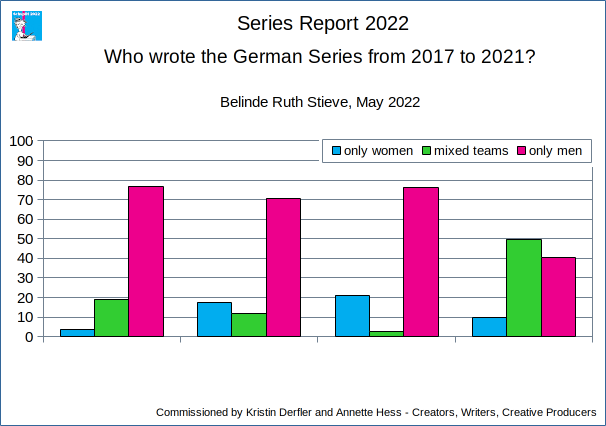 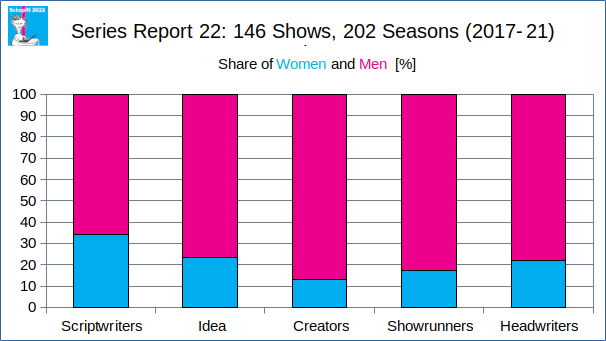 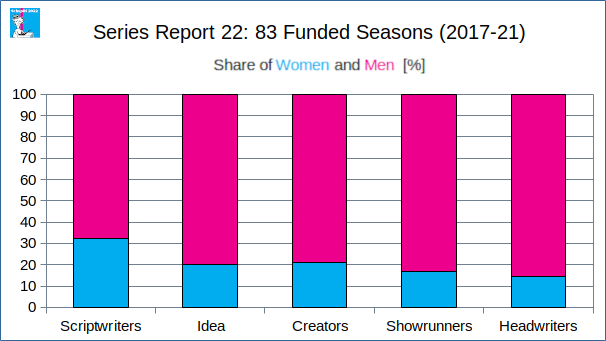 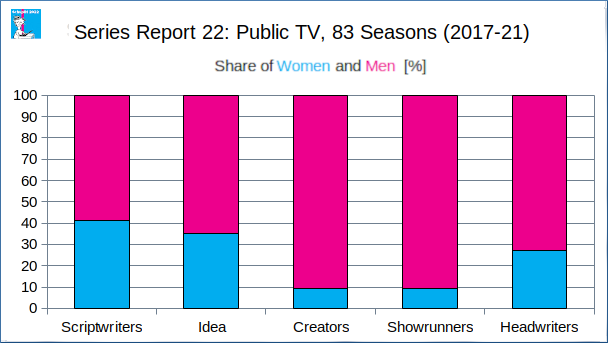 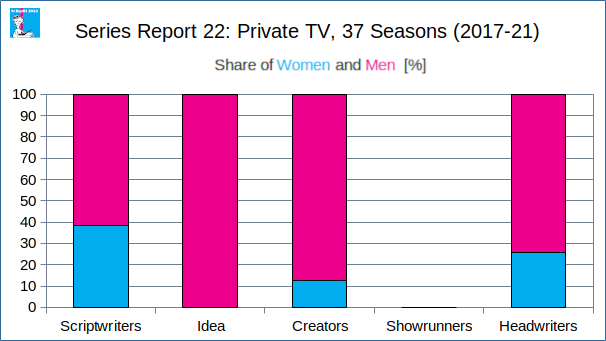 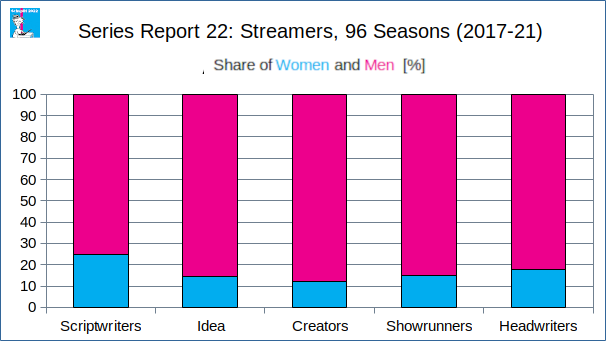 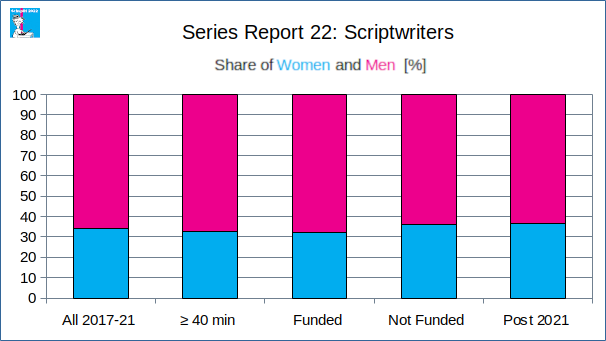 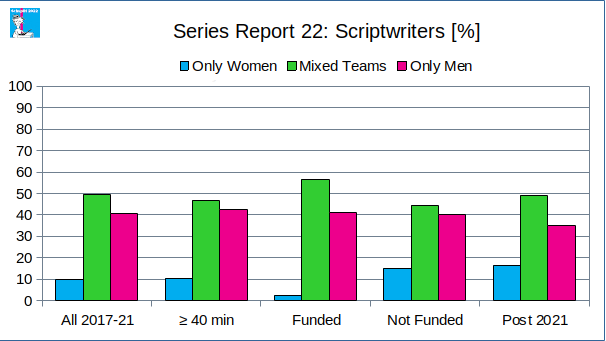 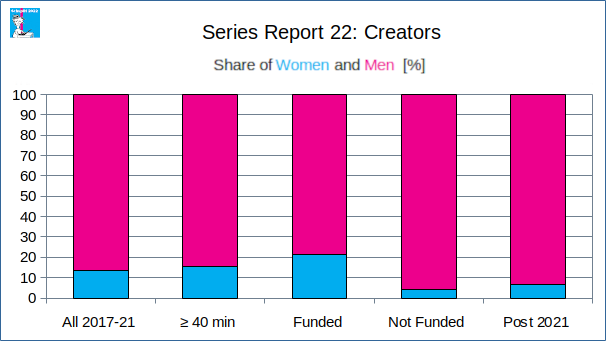 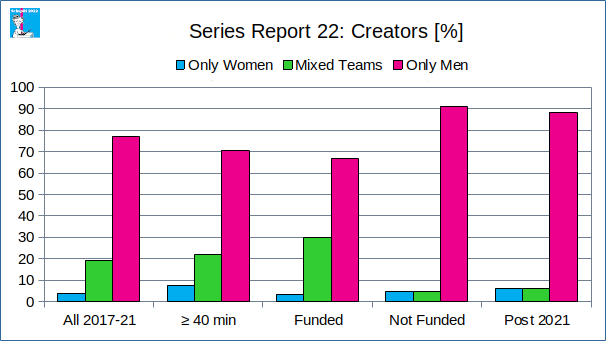 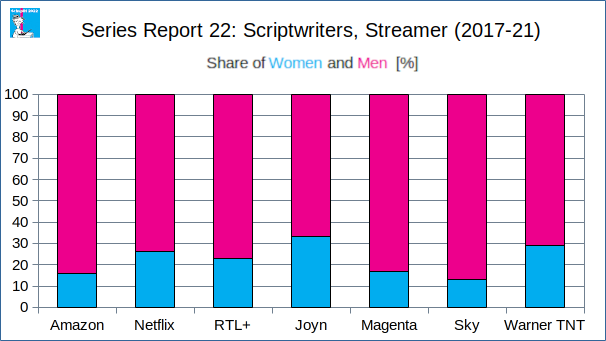 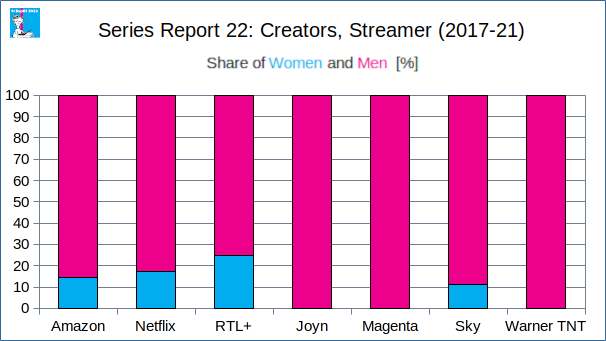 Four International Studies I Quoted from in my Presentation at WCOS Panel: